Generation WTF From What the #%$& to a Wise, Tenacious, and Fearless You: Advice from Experts and WTFers Just Like You

"Yes, you might be addicted to the nicotine in cigarettes, but dieting — and keeping the weight off — is actually more of a challenge for most people than quitting smoking, drinking, or another drug.

"Why? Because self-control is easier when we have clear, bright lines delineating what we can and can't do. No more cigarettes — ever — is clear. But you can't say no more food — ever. You don't have to smoke to live, so you can cut it out entirely. You do have to eat to live, so you've got to learn moderation, that evil gray area of uncertainty.

"Behavioral psychologist George Ainslie has written a lot about the power of bright lines — clear distinctions between what you may and may not do. The techniques of Alcoholics Anonymous are an example of 'bright lines': AA tells recovering alcoholics that they cannot even have one drink because their willpower is not flexible in that area. Your will and self-control are most threatened by rationalizations that permit exceptions to the choice at hand. Bright lines stabilize us, Ainslie finds. But all hope is not lost in those gray areas: gaining skill and increased self-control will allow you to negotiate among blurred lines.

Bottom line: Just don't go there on bad stuff. It is easier to avoid temptation than to overcome it, and 'effective management of attention' can prevent the problems from starting, finds social psychologist Roy Baumeister and other experts. Setting clear limits enhances your personal control. If you have a big interview tomorrow, it'll be easier to prepare and get a good night's sleep if you don't go out 'just for one drink' with friends beforehand. Once you're at the bar, it'll be harder to say no to that second — and third — drink.

"Practically speaking, the more you commit to your course of change (and remember, commitment isn't costless) the more you are likely to set up bright lines and strategies to hold yourself to it. So how bad do you want it? Enough to set up some personal 'bright lines'? If so, let's do it." 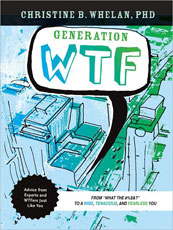