Falling Upward A Spirituality for the Two Halves of Life

By Richard Rohr
Richard Rohr on failure and suffering as the great equalizers.

"In the second half of life, people have less power to infatuate you, but they also have much less power to control you or hurt you. It is the freedom of the second half not to need. Both the ecstatic mirroring of my youth and the mature and honest mirroring of my adulthood have held up what I needed to see and could see at the time; they have prepared me for the fully compassionate and Divine Mirror, who has always shown me to myself in times and ways that I could handle and enjoy. I fell many times relationally, professionally, emotionally, and physically in my life, but there was always a trampoline effect that allowed me to finally fall upward. No falling down was final, but actually contributed to the bounce!

"God knows that all of us will fall somehow. Those events that lead us to 'catastrophize' out of all proportion must be business as usual for God — at least six billion times a day. Like good spiritual directors do, God must say after each failure of ours, 'Oh, here is a great opportunity! Let's see how we can work with this!' After our ego-inflating successes, God surely says, 'Well, nothing new or good is going to happen here!' Failure and suffering are the great equalizers and levelers among humans. Success is just the opposite. Communities and commitment can form around suffering much more than around how wonderful or superior we are. Just compare the real commitment to one another, to the world, and to truth in 'happy clappy religion' with the deep solidarity of families at the time of a tragic death or among hospice workers and their clients. There is a strange and even wonderful communion in real human pain, actually much more than in joy, which is too often manufactured and passing. In one sense, pain's effects are not passing, and pain is less commonly manufactured. Thus it is a more honest doorway into lasting communion than even happiness.

"The genius of the Gospel was that it included the problem inside the solution. The falling became the standing. The stumbling became the finding. The dying became the rising. The raft became the shore. The small self cannot see this very easily, because it doubts itself too much, is still too fragile, and is caught up in the tragedy of it all. It has not lived long enough to see the big patterns. No wonder so many of our young commit suicide. This is exactly why we need elders and those who can mirror life truthfully and foundationally for the young. Intimate I-Thou relationships are the greatest mirrors of all, so we dare not avoid them, but for the young they have perhaps not yet taken place at any depth, so young people are always very fragile." 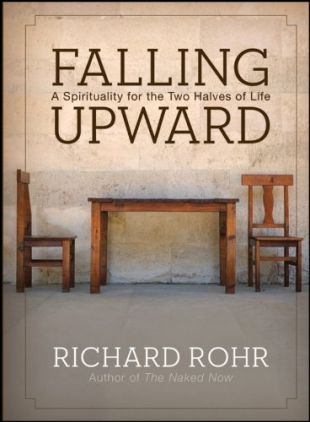