"No matter how confused or emotional the mind is, the mind's nature is always clear, pure, and undeluded. That is why entering the path to liberation is only a matter of our finding a doorway to what is already in us. If we have the right eye to see with, that is the doorway to wisdom. If we look with the wrong eye, we see only deluded objects and will not discover the undeluded mind.

"There is a story that illustrates the opening of the eye that sees undeluded mind. Once there was a king who was captured and imprisoned by an enemy army. As a king, with all of a king's power, ego, and expectations, he had a lot to try to hold on to. But he was subjected to many weeks of torture — physical, emotional, and spiritual — and over time everything he identified with and embraced was taken from him by force.

"One day the king was tortured in a public setting, and this wrenched away his pride and ego. By his next torture session, he had let go of some of his attachment to his ego but was still very fearful. By the next session, some of his fear was gone, yet his mind continued to grasp onto his physical body. In time his teeth were broken, his bones were broken, and he had no hair left on his head. Finally, one momentous day he looked up to see the faces of townspeople joining in on his torture, yet none of the faces was familiar to him — he had no connection with any of these people, had never done anything to hurt them. On seeing this, he could no longer even grasp the reason for all the abuse.

"At that moment he had a deep realization: 'Now they can do anything to me!' He had nothing to hold on to, there was nothing left to take. His mind completely let go of its grasping and connected with a deep sense of freedom. In this way, through the physical, mental, and emotional anguish of torture, he was able to achieve the bliss of undeluded mind.

"As long as you keep grasping, you have something to protect. When you release what you have, there is no more need to protect. When there is no need to protect, there is a feeling of great freedom. Not only is joy omnipresent, it is also quite easy to access as long as you are open to it. Sometimes I tell my students in a simple, humorous way, 'Close your eyes and just feel joyful.' When they try to follow my instruction, do they feel joyful? Yes, they really do. By the power of their connection and trust in me, they allow themselves to let go and open their eyes to the joy that is already there within them." 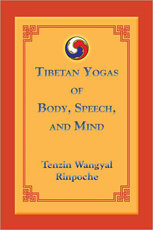