"To paraphrase my astute questioner from the days after 9/11: What can a good Christian, Jew, or Muslim do?

"I remain profoundly convinced that practical multifaith projects are the single best vehicles for Jews, Christians, and Muslims to form the bonds that can build an American faith-based coalition of moderates. Muslims need to incorporate the reality of our theological, historical, and experiential connections to Christians and Jews into our lives and religious practice.

"If you attend a mosque, speak to the imam about creating common projects with a local Christian and/or Jewish congregation. They are, after all, fellow People of the Book. You could suggest reading Scriptures together, or exploring common history, or comparing attitudes toward social justice. You could suggest inviting them to break the fast with you one Ramadan evening. If you are Jewish or Christian, invite your Muslim neighbors to join you on Yom Kippur to break the fast or to celebrate communion.

"The more we experience others practicing their religion, the more we will all appreciate our core similarities. We need to take the lead in doing everything we can to undermine the growing Islamophobia in the United States. The worst thing we can do is keep to ourselves and refuse to engage the larger culture. This will only continue to make us seem strange, clannish, and foreign, unduly influenced by 'radical Islamists' abroad. I know this is a tall order. But we have some powerful, principled, and influential friends. Many Jewish and Christian clergy have taken morally and ethically courageous stands in favor of Muslims' right to religious practice and religious freedom. Many politicians, including Presidents George W. Bush and Barack Obama, Mayor Michael Bloomberg, and Governor Chris Christie of New Jersey, have done so as well. They deserve the nation's and the Muslim community's deepest thanks and praise. Ordinary Americans too have been our allies: I have an enormous Eid Mubarak (Blessed End of Ramadan) card prominently displayed in my office, signed by hundreds of members of a downtown Jewish synagogue in the midst of the Cordoba House crisis in 2010.

"Traditional American values of religious tolerance and freedom do not support Islamophobia. The welcome to immigrants symbolized by the Statue of Liberty is tendered to Muslims as well. The Constitution of the United States guarantees our freedom of religious and political expression. The laws of this great land protect our right to practice Shariah — God's law — every single day.

"We need to stand tall, claim our status as part of the American tapestry, and build on the reservoir of goodwill we already have in this country. I can assure you, from my experience in the days and weeks after 9/11, that even Americans who felt directly attacked by Islam wanted to understand Muslims better, wanted better relationships with Muslims, wanted a better relationship with the Muslim world." 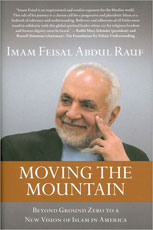