Drops Like Stars A Few Thoughts on Creativity and Suffering

By Rob Bell
Rob Bell on how God transforms all our failures and disappointments.

"This is called the art of failure. What every artist must learn is that even the failed pieces are essential.

"The Franciscan priest Richard Rohr points out that Native Americans have a tradition of leaving a blemish in one corner of the rug they are weaving because they believe that's where the spirit enters.

"I can relate to the rugs.

"I keep discovering that it's in the blemish that the Spirit enters.

"The cross, it turns out, is about the mysterious work of God, which begins not with big plans and carefully laid out timetables but in pain and anguish and death.

"It's there, in the agony of those moments, that we get the first glimpses of just what it looks like for God to take all of our trauma and hurt and disappointment, all those fragments lying there on the ground, and turn them into something else, something new, something we never would have been able to create on our own.

"It's in that place that we're reminded that true life comes when we're willing to admit that we've reached the end of ourselves, we've given up, we've let go, we're willing to die to all of our desires to figure it out and be in control.

"We lose our life, only to find it.

"It turns out that a Navajo rug and a Roman cross have a lot in common.

"We are going to suffer.

"And it is going to shape us. 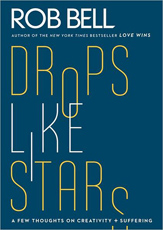