"Durkheim argued that the private time that individuals spend on their own allows them to preserve energy and build an appetite for social participation. He recognized the allure of autonomy and independence, but he had a deep and abiding faith in the fundamental human need to come together, and he insisted that individuals, once liberated, would begin searching for something that transcended themselves. The Americans Emerson and Thoreau shared a similar vision. They argued that being alone, and sometimes living alone, was necessary not because solitude grants us freedom from the burden of intimate social ties, which are, in the end, a source of deep meaning and security, but because it allows us the freedom to cultivate our selves, develop original ideas, and make a productive return to the world.

"People who live in the world's busiest and most modern societies can easily forget that it's vital to learn how to be alone. But finding solitude is particularly important for those of us who spend ever more of our time online and in social media. Today 'friends' are everywhere, distractions are ubiquitous, and all too often our minds are exactly where we are not. Whether online or offline, we are so immersed in social networks that, as Connected authors Nicholas Christakis and James Fowler put it, we have begun 'to form a human superorganism.' In this state, they claim, 'we necessarily lose some of our individuality.' This is precisely the kind of loss that would have worried the philosophers Emerson and Thoreau, the sociologists Durkheim and Simmel, or the psychologist Anthony Storr, each of whom, in his own distinctive way, viewed individuality as sacred because it enhances collective life.

"Living alone is by no means the only way to reassert our individuality or to discover how and where and on what terms we want to engage the world. But an unprecedented number of people in our hypernetworked, ultra-active, 24/7 culture have discovered that, instead of leading to loneliness or isolation, having a place of one's own gives us time and space for a productive retreat. Solitude, once we learn how to use it, does more than restore our personal energy; it also sparks new ideas about how we might better live together. No matter who we are or how we live at the moment, isn't this our most pressing need?" 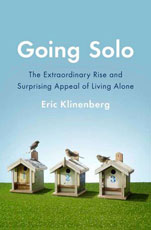