"While Quakers rarely act without careful deliberation, they are not often cautious. One of the most quoted Quaker injunctions is 'live adventurously', and many seek to do just that. Silence may be valued highly, but Quietism is very much a thing of the distant past.

"Advices and Queries also says, 'Try to discern new growing points in social and economic life. Seek to understand the causes of injustice, social unrest and fear.' This is taken very seriously. Quakers often put their lives on the line to do so — literally in the case of peace-workers who seek out the world's trouble spots, such as Iraq, where American Friend Tom Fox was taken hostage and killed in 2006.

"Others seek to find new ways through equally challenging areas: in the early 2000s, a time in Britain of great fear and hostility towards sex offenders, Quakers led the way in creating 'circles of support and accountability' for offenders after their release from prison. They offered some rare human contact for people who were otherwise isolated if not ostracised, and discouraged repeat offending. Initial pilot projects were praised by police and other authorities, and the initiative was developed more widely. Restorative justice — whereby offenders are expected to take responsibility for what they have done and, where possible, directly to address the hurt done to the victim — has been another important Quaker initiative and is gradually reaching wider public awareness and acceptance.

"Every Quaker meeting is a hive of initiatives to make the world, the local district, and the Meeting itself, a better place. Quakers take the lead on seeking new ways of breaking down social injustices, supporting food banks or building medical centres for homeless people. A sense of the overwhelming urgency of international justice leads many to get involved with a host of activities concerned with Third-World development, health or education, or economic initiatives, including fair-trade issues. Others whose concern focuses on environmental degradation and climate change take a lead on exploring an equally complex set of practical low-carbon ways of living. Issues — theoretical, political and practical — are debated continually, and Quakers are often among the first to sign up to demonstrations, letter-writing campaigns or leafleting the neighbourhood. Many actively supported the Occupy movement in 2011-12.

"While churches of many denominations may see some or all of these activities, Quakers have proved able to win people's trust in an enormous range of circumstances. Their humanistic approach — stressing Christ's ministry rather than his divinity, reminding themselves to 'think it possible you may be mistaken' and rarely speaking of sin or falsehood, nor showing much concern for heaven or hell — is in stark and welcome contrast to the fundamentalism that has grown up in recent decades. Quakers are often deeply involved in initiatives to bring faiths of all kinds together and to break down mistrust and fear.

"This diversity of activity reflects the diversity of the Quaker Church itself. The 'typical' Quakers of the Anglo-Saxon world are a small minority of Friends around the world — with four out of every five Quakers now to be found in evangelical Meetings in East Africa or South America.

"In terms of numbers, liberal Quakerism — which had its last great injection of new blood in the anti-nuclear peace movements of the 1980s — may be on a gentle decline, absolutely as well as relatively; but it continues to throb with urgency and still performs a vital function, identifying and facing some of the most difficult issues that too many others ignore.

"For all Quakers try to follow George Fox's injunction: 'Be patterns, be examples in all countries, places, islands, nations, wherever you go, so that your carriage and life may preach among all sorts of people, and to them. Then you will come to walk cheerfully over the world, answering that of God in everyone.'

"The world today desperately needs them." 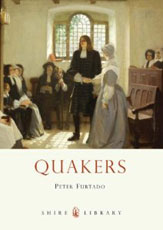