When Your Life Is On Fire What Would You Save?

"We are not likely to be the authors of great books or the dispensers of great wisdom, but Arthur's [Waskow] task as a rabbi is no less ours. We are all called to parse the Scriptures, midrash-like, not only to mine them for the wisdom they contain but also to guard against a simplistic reading that refuses to take into account the irony, subtlety, and poetry with which their truths are dispensed. We can read the story of the exodus — with its burning bush, its ten plagues, its parting of the Red Sea — as a quaint fable whose embellishments undercut all claims to truth; or we can see it, as Arthur does, as metaphor for the fundamental human condition of slavery in search of freedom.

"We can study the story of Noah's ark and dismiss it as fantasy, a kind of primitive, premillennial Sinbad. Or we can see in it, as Arthur does, as the causative relationship between hubris and self-destruction.

"We can insist on the tyranny of literalism in which Scriptures must pass the litmus test of historical accuracy in order to hold any wisdom; but if we do so, we render ourselves either narrowly cynical or willfully ignorant. The cynics refuse to believe that wisdom can be communicated in metaphor, while the ignorant insist on hanging their entire faith on the wobbly pedestal of historicity and in so doing force themselves to contort logic in order to fit a pointless premise. Or we can do as Arthur and Phyllis [Arthur's wife] do: put ego and self aside, apply intellectual rigor, turn the texts this way and that, look at them from every angle, live with them, listen to them, and let them speak to us not only about ancient truths but also about how those truths can be brought to bear on the most pressing issues of our time.

"In the end I think this is what keeps Arthur so vital at seventy-seven. In hearing him speak about his midrash, about how he came to it, how he feels called to it, and how he and Phyllis now dispense it for the betterment of both their community and their relationship, I hear a man suffused with unquenchable enthusiasm. And that is what we all should be. Enthusiastic. En theus. With God." 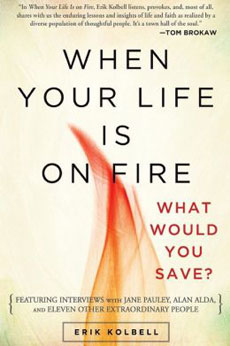