"Many people mistake sacred chow as being about going back to nature or some other equally impossible and improbable destination.

"Sacred chow is more a nod to nature than a return to nature. Nodding is holy. It says that you see the full tilt boogie of food. Nodding is alpha and omega, creation and destination, from the first seed to the last seed. Vegetarians understand the sourcing of food very well. That is their best feature.

"At a restaurant in Phoenix, the very kind waiter made sure the lard didn't go into my vegan companion's beans before they came out. She didn't even have to ask. He had seen her ask about other items on the menu and offered. That is sacred chow. She said she would have eaten the beans anyway and knew they had lard. But consideration of components goes a long way to enhance the freedom of food. We get to say yes or no — and even to tell the banquet people in the hotel that mixed vegetables with a potato is hardly vegetarian fare. I always think the vegetarians are lucky not also to have the rubber chicken, but clearly I need work on my appreciation deficit disorder also.

"The sensitivity that the waiter showed my friend: that is our objective, spiritually, when it comes to food.

"People who pay attention to their food and are grateful for it, even when it is not 'correct,' notice nature. When nature is not noticed, people find it hard to pray and even harder to eat.

"Prayer at table notices nature. It notices God. It notices food. Noticing is better than not noticing.

"That is what I have been trying to tell you.
We don't go back to this splendid place.
We go forward to it.

"Can We Pray: 0 God, let us notice what we think we have already seen. Amen." 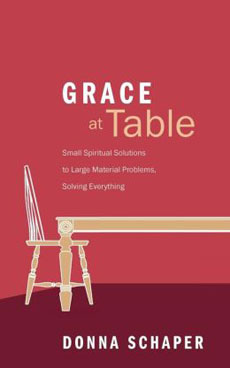