By Michael G. Long
A profile of Fred Rogers as a Christian prophet and peacemaker.

"[Fred] Rogers would most likely be among the first to remind us that he was not 'all things to all people' (1 Cor. 9:22). He was just himself, with all his strengths and weaknesses, all his advantages and limitations, and he was that way for reasons unique to his own personal history, many of which we will never know. But perhaps we would do well, when pinpointing his shortcomings, to recall that in his own prayer life Rogers often sought divine guidance and wisdom — and especially forgiveness for those times he fell short of unconditional love.

"This, of course, points us to another important dimension of his compassion. Fred Rogers was not just a compassionate human being; he was a practicing Christian who firmly believed that human compassion has its ultimate source in a God whose love for all of creation never ends. For Rogers, we can and should be compassionate because God is compassionate toward us — always and everywhere. Again, context matters here, and when we place Rogers's spiritual beliefs in their historical perspective — a time when Billy Graham's judgmental God was wildly popular — we can clearly see just how prophetic Rogers's compassion was.

"But it's not enough even to say that he was a Christian prophet. Perhaps most of all, Fred Rogers was a Christian peacemaker. The compassion he expressed toward victims of violence and injustice was not for its own sake; it was ultimately for the sake of the peaceable reign of God. Rogers opposed all U.S. wars in his lifetime, as well as various barriers to individual and social peace, because he believed that the Prince of Peace beckons us to establish the peaceful reign of God here on earth — in our hearts, communities, and societies.

"As a Christian peacemaker, Rogers took his cues from the parables of Jesus. His compassion did not come to expression in marches, rallies, and public protests, but in the quiet of a studio, behind the staring eye of a camera, and on a set he built for sharing stories about the peaceable reign of God — a place where individuals seek to resolve conflicts peacefully and love one another and the world as fully as possible. Rogers sought to bring the Prince of Peace into our lives by telling us captivating and compelling tales about a neighborhood of peace — peace within and between all of God's creation. This is the rich legacy of Fred Rogers; out of compassion, he built a neighborhood of peace and love just around the corner from the violent and unjust center of U.S. politics and economics.

"Yes, Fred Rogers was a compassionate human being, and at times an imperfect one. But let's be sure to fill that out when we recall his legacy. As a compassionate human being, he was also a Christian prophet and peacemaker who sought to accept us as we are, with all our violence and injustice, while at the same time inviting us to visit a neighborhood marked by unconditional love for one another and the world — the peaceable reign of God — so that we can go back home and build similar neighborhoods in our own communities. Contrary to popular wisdom, Rogers wasn't content merely to accept us as we are; he wanted us to become prophets and peacemakers committed to making our neighborhoods bastions of compassion.

"Can we really build neighborhoods of compassion? By taking Fred Rogers seriously, rather than dismissing him as a lightweight or deifying him in the clouds, perhaps we can at last see that his own steadfast commitment to peace in a time marked by relentless wars and terror gives us reason to hope against hope that the Neighborhood of Make-Believe — where King Friday orders his troops to put their weapons away — can indeed become our very own." 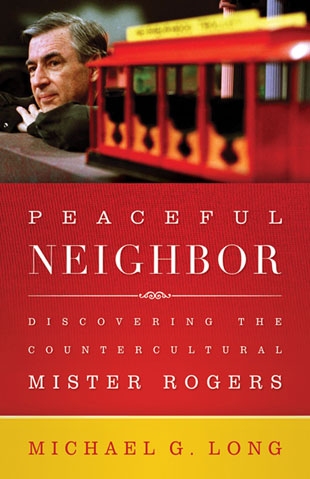