Good Neighbors The Democracy of Everyday Life in America

By Nancy L. Rosenblum
A commentary on the experience of moving as a carrier of hopefulness in fiction stories.

" 'The red of the grass made all the great prairie the colour of wine-stains, or of certain seaweeds when they are first washed up. And there was so much motion in it; the whole country seemed, somehow, to be running.' Neighbors rent, sublet, buy, sell, and move away. They are our immediate, close-up measure of personal and social change. The historical time frame is wildly variable as befits settler, immigrant, and suburban narratives -- from the offspring of men and women floated to America on the Mayflower and still occupying the same spot of land in Provincetown, to the 'great migration' of southern blacks to the North, to the first Iraqi immigrant family in a Nebraska town, to early comers to a Florida retirement community. For romantic sensibilities, movement signifies freedom, but here it is not tied thrillingly to speed or escape or immersion in the present moment – movement for itself. It is not Kerouac's open road. Existential restlessness is one aspect of movement, and so is aimlessness; adolescents 'drifting from city to torn city, sloughing off both the past and the future as snakes shed their skins.' But in settler, immigrant, and suburban narratives moving has a destination: home.

"For Cather's settlers on the move across the plains, in the perpetual forward momentum of Saul Bellow's Augie March growing up among Chicago immigrants, and for families transplanted to suburbia, moves are beginnings. Typically, the direction is 'pitched relentlessly forward.' Arrival may come with fantasies of shining possibility: take Jay Gatsby's move to his magnificent house within sight of the green light at the end of Daisy Buchanan's dock: 'He had come a long way to this blue lawn and his dream must have seemed so close that he could hardly fail to grasp it.' Or moving may represent some more mundane opportunity. We also know that behind all that motion may be misfortune, escape, retreat, loss, dispossession, economic fall. Empty nests, bankruptcy, aging parents, the hunt for work. Moving may be inauspicious. Moving day is not always elected, and neither is where we land.

"Even so, in fiction and in life, propulsion is commonplace and obdurately infused with some bit of optimism. Whether or not this initially open attitude projects a better life overall, each new move and home comes with anticipation of encounters with people living nearby and it often comes with a tentative resolve to do 'what anyone would do, here.' Expectancy fastens on the prospect of home in an environment of 'decent folk.' Perhaps especially, suburban neighbors 'bear a heavy load of projection.' This openness is voiced by newcomers and by the neighbors who receive them. The good neighbor ideal is anticipatory, modest, and available to us — a reasonable expectation, a carrier or hopefulness." 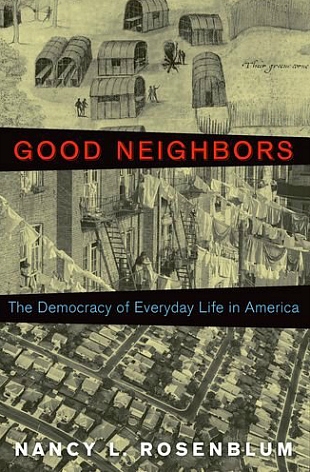