By M. J. Ryan
Examples of how parents can pass generosity on to their children.

"A seed will only become a flower if it gets sun and water."
-- Psychiatry professor Louis Gottschaer

"Ever since contemporary social scientists have concluded that giving behavior is innate, they've become very interested in the study of altruism, asking why some people help while others don't, and which circumstances lead to help being offered. They have begun to study the childhoods of individuals who have demonstrated a high degree of altruism. The social scientists found that these folks had loving parents who instilled in them a healthy sense of self-esteem and self-efficacy. Their parents also instilled a strong sense of right and wrong; like the Onondaga Indians, altruists were taught specifically to be generous.

"Most important, these folks had parents who modeled generosity. Studies of volunteers have also found that the majority of dedicated volunteers had parents who were also volunteers. Like any other aspect of parenting, we not only have to say what's right, we have to do what's right in order for our kids to learn. Instead of just telling them to be generous, we must demonstrate clearly and consistently our own generosity.

"At Christmastime, I always took my stepkids and my child to a toy store, where I let them pick out a hundred dollars' worth of toys to give away to Toys for Tots. They really got a kick out of thinking about the pleasure other kids would get from their selections. When I was a kid, we used to make up food baskets for families in need at Thanksgiving and go Christmas caroling at senior centers.

"While these actions are wonderful, they only happen once a year, which isn't enough to instill the giving habit. My friend Dawna's grandmother used to do this simple practice with her.

"When you are doing something enjoyable with your child, like swimming, say something like, 'We're having such fun. Let's take a minute to send this feeling of fun to all those kids who have never been in a pool.' This way, they'll learn, just as the Native American kids did, that giving comes from a sense of well-being and that giving enhances the abundance that the giver is experiencing rather than diminishing it." 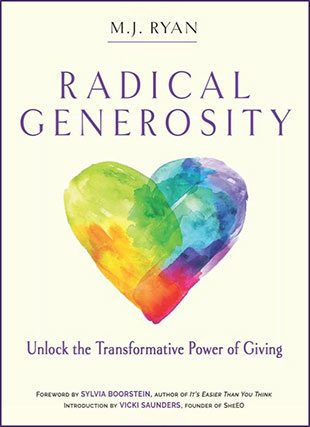