Recipes for a Sacred Life True Stories and a Few Miracles

By Rivvy Neshama
A reflection on moving past procrastination and moving forward step by step.

"After writing thirty-some stories for this book, I got stuck. Sure. I had more recipes to share, but no stories to make them come alive. Great, I thought, just what people need, another 'Do This' list of spiritual advice that would sound a million times better coming from the Dalai Lama than Rivvy Neshama ('Rivvy who?'). Fortunately, I had lots of ways to procrastinate and avoid facing just how stuck I was.

"But the day of reckoning came. I had put aside four hours to write, and maybe I would have (really) if my computer hadn't suddenly gone black while making sounds like a vacuum cleaner. I was also in a jealous, edgy, angry mood, not the best place for writing a book on sacred living.

"Later, my friend Ellie called and we shared updates on our lives. I sadly mentioned the book and being stuck, cut off from the flow.

" 'Don't lose faith,' she said. 'Inspiration comes and goes. Just take it poco a poco. Your life will show you what to write.'

" 'Poco a poco,' I said. 'Little by little . . . step by step. That's one of them!' A recipe I wanted to share. That if you resolve to do something but have trouble doing it, or feel overwhelmed and don't know where to begin, or you're lost in darkness and can't find the light . . . not to worry. Just keep the faith and move forward, one step at a time.

"When I was a kid, we played endless games in the alley behind my house. One of my favorites was called Mother, May I. You would ask the leader, who stood on a chalk line far out in front, 'Mother, may I take two giant steps?'

"If the leader said no, you could ask to take 'ten baby steps' or 'three scissor steps.' And the first one to reach the leader won.

"I don't remember the rules exactly, but I do remember this: It didn't matter so much what kind of steps you took, so long as you kept moving forward, little by little, until you finally reached the line. And the nice thing was that everyone got there, sooner or later. The game didn't end until they did." 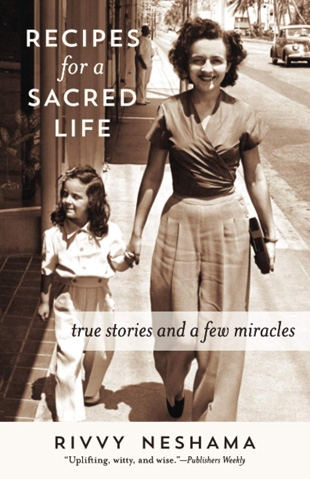