Land How the Hunger for Ownership Shaped the Modern World

"Once the real estate closing ceremony was over and done with, I lit out westward down the road from Kent, and ten minutes later, just past the sign for Macedonia Brook State Park, and the granite state — line markers that indicated the beginning of New York — the beginning and eastern edge of the Oblong — and after I had turned down the little dirt road that Rex Brasher had once called Chickadee Road because of the swarms of such creatures in the trees, and after half a mile bumping along the gravel and the potholes, I was there.

"I stepped out of the car and into the cool shade of the evening. In a trice I was in my forest, thinking of what exactly I had just done. And wondering: What does my ownership of this land truly signify? What does it mean, to own land? Surely land, I said to myself, is an entity that cannot really be owned, by anyone.

"And yet, in legal terms, this tract had become possessed. This tiny morsel of the planetary surface, a barely significant three one-billionths of it at best, has, at various times in its maybe five thousand years of populated existence, been owned or claimed or settled, among others:

by groups or families or communities of Mohican Indians,

by groups or families or communities of Schaghticoke Indians,

by — at least notionally — three Dutch stadtholders in the House of Orange-Nassau,

then in a titular sense by a number of English monarchs, the Stuarts Charles II, James II, Mary II, William III, and Anne, and then after the English became British the sad Hanoverian trinity of the first three King Georges,

and during this post-Dutch time the land was owned or presided over by the patriotic-Dutch-turned-English-loyalist Philipse family, as Patentees,

then once these were booted unceremoniously from their holdings, the land formerly tenanted by lessees of Philipses came actually to be owned, in fee simple by farmers and hunters and charcoal makers whose names have passed into undocumented oblivion until it was owned

by a Sicilian immigrant named Vacirea, then

by a German American named Doll after which it was bought

by a Sicilian American named Cesare Luria — and finally,

by the current owner — who became transfixedly fascinated with the notion of landownership, and of how such a thing could possibly be, and why so many all across the world seem to go to such great lengths to acquire, to mortgage themselves for, to fight fight for, to steal, to borrow, to buy, to marry for, to settle upon, to commune with an entity which, in truth, cannot possibly be owned, by anyone, ever.

"But it remains a reality that, in most societies today, ownership of land happens — even if the very concept of ownership reduces itself to one simple and popularly accepted fact, as a land lawyer put it: ownership means that you have the right to call the police to throw anyone else off what the title documents say belongs to you. It is not so much that you own it; it is just you own the right to tell everyone else to keep off it.

"There is rather more to it than that, naturally. There is the so-called Bundle of Rights, an aspect of landownership recognized in law at least by most western societies. You have the right of possession; the right of control; the above-mentioned right of exclusion; the right of enjoyment; the right of disposition. All of these are legal terms that extend in law far beyond their common-sense dictionary definitions, and which, to the enduring pleasure of the legal community, are still open to all manner of shades of interpretation. And 'twas ever thus.

"To begin the process of possession, control, exclusion, enjoyment, and disposition, once the very idea of ownership is accepted, then a single cardinal rule applies. In order to own the land, you need to know where it is. You must know where it begins and ends, where its boundaries are. The land needs to be delineated and demarcated, and with great and unerring precision. Whether it is a meadow or a nation, a pasture or a principality, its size and shape and the length and direction of all of its edges need to be known.

"Enter, some thousands of years ago, men equipped with ideas, devices, and machines specifically designed to do just that." 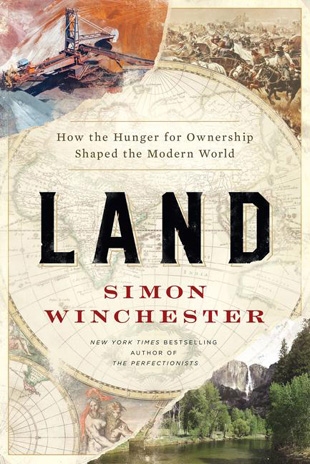