By Christine Valters Paintner
Reflections on mythic time and the end of days.

“Sometimes we might feel as though we are at the end of time, at least on a human scale. News every day of the ever-deepening climate crisis should alarm all of us. I write and edit this book during the pandemic. We might wonder, Is this the true apocalypse? Are we living in the end of days?

“Mythologist and storyteller Michael Meade writes, ‘Tales of apocalyptic endings can be found in most cultures; like stories of creation they are part of the human inheritance of myth and imagination. Endings and beginnings are mythic moments par excellence; they are the extremities of existence and the bookends of cosmology.’ What some of the great creation myths tells us is that in all endings are also the seeds of a new beginning. We find this in the cycles we have been exploring in this book as well. The seasons of the year move not in a straight line but in a circle, always moving through the release of autumn and rest of winter, emerging into spring’s blossoming and summer’s fruitfulness.

“On a cosmic scale, these cycles may be much longer to see. We may be in the midst of the winter of our humanity, but what myths tell us is that something will eventually break through into blossom. It will likely look nothing like what any of us expects, and it may not be what we would choose. But mythic time encourages us to truth these rhythms. Even the Greek root of the word apocalypse means ‘to reveal what is hidden, to uncover a secret meaning.’ In the midst of the intensity of life’s drama and unfolding, being in a time of endings also means moving toward new beginnings. This time can be when new possibilities and truths are revealed that have until now been hidden.

“Michael Meade continues: ‘To be alive at this time means to become a witness, willing or unwilling, to the loosening of the web of nature as well as the unraveling of the fabric of culture. It means to be present as accepted patterns dissolve, as institutions become hollow and uncertainty comes to rule…. The issue is not the literal “end of the world,” but the winding down and speeding up that happens on the downside of a cosmic cycle.’ Geology and myth come together to reveal a story of cycles; time always moves in a circle rather than a straight line. Recognizing this is a humbling way of feeling our insignificance in the grand scheme of things while also feeling the importance of our being alive in this moment right now.

“Perhaps the more we live into the cyclical rhythms of breath, day, moon, and seasons, the more we might trust that a new story is coming.

“How will we be present to the endings in our world? How will we help to cultivate new beginnings?” 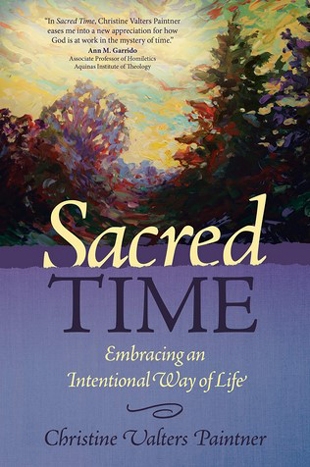