By Kurt Vonnegut, Jr.
A novel that presents the kind of gallows humor that is a brave man's way of blessing you.

"The humor in Vonnegut's fiction is what enables us to contemplate the horror that he finds in contemporary existence. It does not disguise the awful things perceived; it merely strengthens and comforts us to the point where such perception is bearable . . . The comic is the only mode which can allow itself to contemplate absurdity.
—Robert Scholes

Can you accept a world where the dish runs away with the spoon and the cow jumps over the moon? What of the three blind mice who all ran after the farmer's wife — did you ever see such a funny sight? This is a test . . . for the next 30 seconds — do not pass go — do not collect $200. Around and around she goes, where she stops nobody knows — except Kurt Vonnegut, Jr. The world of crazy circumstance, the universe of fortuitous happenings, the life of interruptions, the realm of dashed dreams, the merry-go-round of life: he is acquainted with these things. And in his eighth novel, Breakfast of Champions, he has brought us face to face with the modern world as a chamber of horrors — a plastic fantastic mad mad mad mad world.

Kilgore Trout knows of what we speak. He is a science fiction writer who knows very little about science but almost everything there is to know about modern man. He thinks about this country quite a bit. And so does the sometime narrator of this story, Philboyd Studge — alias Kurt Vonnegut, Jr. They wonder about a country where:

Now you may ask, dear reader, what does this have to do with Breakfast of Champions? What happens in the book?

Dwayne Hoover, a rich Pontiac dealer who owns most of Midland City, has bad chemicals in his body — which means he's near suicide (his wife drank Drano, his homosexual son hates him, and his mistress wants to use his prestige to get herself a food franchise). Kilgore Trout, the aforementioned science fiction writer, has the answer to Dwayne's question "What is the purpose of life?":

To be
in the eyes
and ears
and conscience
of the Creator of the Universe,
you fool.

But since Dwayne isn't in New York when Trout comes to this conclusion, he saves the answer until he arrives in Midland City to speak at the town's Festival of Arts. In Trout's book, Dwayne at last learns that he's free while everyone else is a robot. He goes berserk in a whirlwind of violence turning a cocktail lounge upside down and physically brutalizing ten people before he's subdued and taken to the hospital. The Arts Festival is cancelled — needless to say. That's what happens in the book.

Yes, well, ok. But what's the message? Why should you go out and buy this book? Those two questions are disturbing for any reviewer. Like any other Vonnegut work, Breakfast of Champions is about what it means to be alive and kickin'. The universe is unreasonable. The syntax of stuff doesn't make sense. The center caves in. When Trout arrives in Midland City, an admirer named Milo Maritimo approaches him as savior:

"Oh, Mr. Trout teach us to sing and dance and laugh and cry. We've tried to survive so long on money and sex and envy and real estate and football and basketball and automobiles and television and alcohol — on sawdust and broken glass!"

"You have nothing but desolation and despair here, you say! I bring you more of the same!"

And so it goes, Vonnegut fans. The novelist is not the answer man. He holds up a mirror to our world and lets us see what it's like. Vonnegut assures us: "It's hard to accept chaos, but it can be done."

And why should you go out and buy Breakfast of Champions? Critic Joel David Bellamy notes:

Buy the book to keep writers of paradoxes alive and well. St. Paul will bless you, too.

And finally, patient reader, do not listen to the murmurings of Time and Newsweek as they condemn Vonnegut's black comic cuteness and his despair about the novel's form. On the latter point, they don't understand what John Barth meant when he said: "One way to respond to a feeling that the novel is dead is to write a novel about it." Vonnegut has done just that with Breakfast of Champions. When the author releases his characters at the end of the book, he says, "I am cleansing and renewing myself for the very different sorts of years to come." Like a host of other creative Americans, Vonnegut the novelist is trying to get born again. 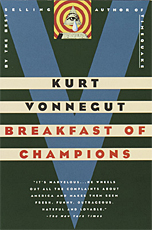