America and the Challenges of Religious Diversity

By Robert Wuthnow
A substantive work on the challenges that lie ahead for those who believe in religious diversity and the riches it holds for those who practice it diligently and imaginatively.

Diana Eck and other religious researchers have noted that the practice of religion in America has become much more varied and yet survey after survey shows that most people still consider it to be a Christian nation. In this watershed work, sociologist Robert Wuthnow examines how we as individuals and as a nation are responding to the challenges of increasing religious and cultural diversity. He notes at the outset that American identity is an odd mixture of religious particularism and cultural pluralism.

The material here is the result of a three-year research project that included more than 300 in-depth interviews and a new survey with a sample of 2910 adults, selected to be representative of the adult population of the United States. Three substantive questions are at the heart of this inquiry: (1) How have Americans been able to maintain their conviction that Christianity is uniquely true and that theirs is a special nation with a distinctive (even divine) destiny? (2) How has this been possible, given our frequent and now increasing encounters with other religions? (3) As we do face increasing diversity, how are our beliefs and identities changing to accommodate this diversity? According to the best estimates, there are some 1/3 million Hindus residing in the United States, 2.5 million to 4 million Buddhists, and around 2 million Muslims along with Native American religions, New Age groups, and assorted other spiritual movements.

There is a rich tradition in America of viewing religious diversity in positive terms but many citizens still consider it a threat to democracy and an undermining of long-established American values. Add to this the question as to whether increasing religious diversity will exacerbate the divide between those who think religion is important and those who don't. With such views being expressed freely it is no wonder that many Muslims, Buddhists, and Hindus wonder whether their religious freedom will be honored. Muslims complain about experiencing discrimination at work and the number of hate crimes against them is increasing.

Wuthnow divides his national sample of attitudes toward religious diversity into three kinds of people: spiritual shoppers, inclusive Christians, and exclusive Christians. They respond to various questions about the Bible, Jesus, and salvation. The main thing that separates spiritual shoppers from inclusivist Christians is the notion of sin. Exclusivist Christians are much more interested in eternal life than the other two groups of respondents. Thinking about diversity does not register on a range of concerns. Wuthnow concludes that only a small portion of the American public claims to be more than casually familiar with the teachings of Islam, Hinduism, or Buddhism and the numbers of those who have attended another place of worship more than once or twice are small.

Although there are more than 300,000 Christian congregations in the United States, relatively few church members (no more than a fifth) claim to have participated in any interreligious activities at their congregations. In other words, there is plenty of room for improvement regarding interfaith education and opportunities within parishes across the country: "At least half of the nation's churches appear to be doing nothing to engage directly in interreligious discussions or interaction, while the activities sponsored by the remaining half are fleeting and often more symbolic than substantive. Church leaders appear to be protecting themselves from having to rethink any of their basic theological suppositions or programmatic priorities in light of the fact that a growing number of their neighbors are members of religions other than Christianity."

Wuthnow also found that clergy seem unable or unwilling to deal with the complications and challenges that are part and parcel of the growing number of interreligious marriages. In light of all these findings, the author calls us to "reflective pluralism." Here are some of the traits of people engaged in this practice:

1. They are interested in the substantive aspects of pluralism.
2. They develop an identity as a "studier," as one woman put it.
3. They carefully consider what it means to have a "view."
4. They emphasize respect.
5. They exhibit a principled willingness to compromise.

He then discusses some interfaith models and other kinds of programs that salute diversity and commonalities among religions. America and the Challenges of Religious Diversity by Robert Wuthnow ought to be a spur to all those who have moved beyond interreligious dialogue to learning practices that Muslims, Christians, Jews, and Hindus can do together as they seek to create a better world through acts of service, love, and compassion. 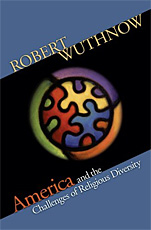