Swimming in the Sea of Talmud Lessons for Everyday Living

By Gershon Schwartz, Michael Katz
Accentuates the importance of study in Judaism and reveals how each generation puts its own imprint on this resource.

"One of the hallmarks of the Jewish religion is the sacred times, or holy days, that mark the calendar. By definition, a holiday is a twenty-four-hour period. But the Rabbis ordered that these holidays began just a little earlier and end just a little bit later. We are to 'borrow' time from the ordinary days that precede and follow the holy day, and add it onto the holy day itself." This practice of adding from the ordinary onto the sacred is only one of many revealed in this study of the Talmud.

Michael Katz and Gershon Schwartz, two rabbis, start with an overview of this central work of Jewish tradition covering its language, style of writing, mode of thinking, and purview of the world. They move on to a consideration of 90 Talmud texts including an aphorism, marginal notes, a context for the rabbinical discussions, and modern applications of these ancient teachings.

Swimming in the Sea of Talmud accents the importance of study in Judaism and reveals how each generation puts its own imprint on this resource. There is much wisdom here about holiness, humility, blessing, cherishing special moments, silence, repentance, and ethics. An example of the latter is the following rabbinical aphorism: "One who causes others to do good is greater than one who does."

Try a Spiritual Practice on Reverence 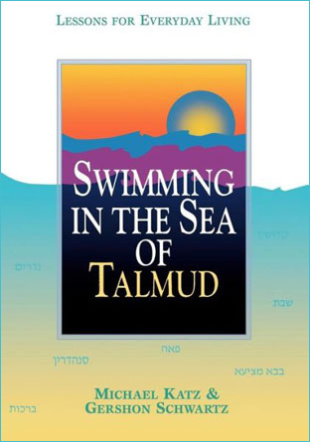