Here is a new anthology on the tenth anniversary of the death of spiritual writer and teacher Henri J. M. Nouwen (1931-1996) whose semi-confessional approach has connected with many seekers around the world. Editor Michael Ford (Wounded Prophet: A Portrait of Henri J.M. Nouwen) has gathered excerpts from Nouwen's writings as a young psychology professor and from his days at L' Arche.

In his introductory essay, Ford notes that this wounded healer dealt with the polarities that comprise the human adventure: loneliness and solitude, hospitality and hostility, illusion and prayer. Ford notes: "Like the fourteenth-century English anchoress Julian of Norwich, Nouwen felt it would profit his fellow Christians if he noted down his experiences." The emotional and spiritual experiences gathered in this anthology prove how on target Nouwen's goal really was: he guides and inspires us with the authenticity of his struggles and his abiding belief that God's grace is able to transform our worst difficulties and flaws.

Here is one spiritual director who is proficient in the art of spiritual reading. Nouwen looks at his emotions and refuses to run from them. He sees that joy and sorrow cannot be separated; to do so is to live in a reality sealed off from the everyday. He explores the difference between loneliness and solitude. And he probes the close connection between our hostility toward others and the spiritual calling to practice hospitality. Nouwen sees gratitude as something more than a spontaneous response to the many gifts of life; it is also a discipline which can lead to a totally different orientation to everything that happens to us.

One of the most profound passages in the book is about befriending death. In these perilous times when so many images of death and apocalypse seize our consciousness, Nouwen's words are more poignant than ever:

"Befriending death seems to be the basis of all other forms of befriending. I have a deep sense, hard to articulate, that if we could really befriend death we would be free people. So many of our doubts and hesitations, ambivalences, and insecurities are bound up with our deep-seated fear of death that our lives would be significantly different if we could relate to death as a familiar guest instead of a threatening stranger." 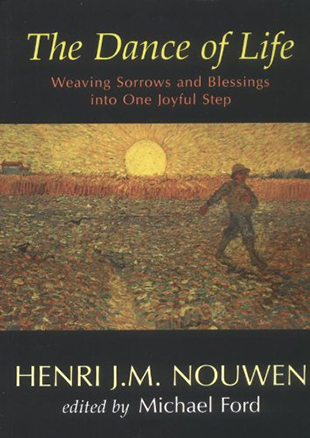