The Heart of the Enlightened A Book of Story Meditation

By Anthony de Mello
250 stories from many religions and cultures on spirituality.

Anthony de Mello (d 1987) was Director of the Sadhana Institute of Pastoral Counseling in Poona, India. A member of the Jesuit province of Bombay, he was widely known in English- and Spanish-speaking countries for his retreats, workshops and seminars on prayer, and spiritual therapy. This book, a sequel to Taking Flight, sets out to shed light on the spiritual states that come when our lives are not animated by fear and illusion. To do this, de Mello uses 250 stories from many different cultures arranged in chapters on Spirituality, Education, Authority, Human Nature, Relationships, Service, and Enlightenment.

De Mello is a master storyteller and has the ability to imaginatively take us to places we have never been before. Here is some examples:

"A family settled down for dinner at a restaurant. The waitress first took the order of the adults, then turned to the seven-year-old.

"The boy looked around the table timidly and said, 'I would like to have a hot dog.'

"Before the waitress could write down the order, the mother interrupted. 'No hot dogs,' she said, 'Get him a steak with mashed potatoes and carrots.'

"The waitress ignored her. 'Do you want ketchup or mustard on your hot dog?' she asked the boy.

" 'Coming up in a minute,' said the waitress as she started for the kitchen.

"There was a stunned silence when she left. Finally the boy looked at everyone present and said, 'Know what? She thinks I'm real!' "

"An ancient King in India sentenced a man to death. The man begged that the sentence be rescinded, and added, 'If the King will be merciful and spare my life, I shall teach his horse to fly in a year's time.'

" 'Done,' said the King. 'But if at the end of this period the horse cannot fly, you will be executed.'

"When his anxious family later asked the man how he planned to achieve this, he said, 'In the course of the year the King may die. Or the horse many die. Or who knows, the horse may learn to fly!'

"There was once a rabbi who was revered by the people as a man of God. Not a day went by when a crowd of people wasn't standing at his door seeking advice or healing or the holy man's blessing. And each time the rabbi spoke, the people would hang on his lips, drinking in his every word.

"There was, however, in the audience a disagreeable fellow who never missed a chance to contradict the master. He would observe the rabbi's weaknesses and make fun of his defects to the dismay of the disciples, who began to look on him as the devil incarnate.

"Well, one day the 'devil' took ill and died. Everyone heaved a sigh of relief. Outwardly they looked appropriately solemn but in their hearts they were glad for no longer would the master's inspiring talks be interrupted or his behavior criticized by this disrespectful heretic.

"So the people were surprised to see the master plunged in genuine grief at the funeral. When asked by a disciple later if he was mourning over the eternal fate of the dead man, he said, 'No, no. Why should I mourn over our friend who is now in heaven? It was for myself I was grieving. That man was the only friend I had. Here I am surrounded by people who revere me. He was the only one who challenged me. I fear that with him gone, I shall stop growing.' And as he said these words, the master burst into tears." 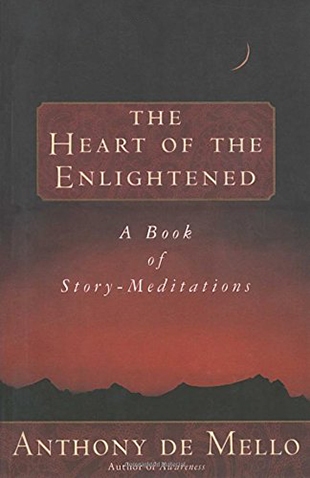