By Lao Tzu, Stephen Mitchell
Translation and commentary on the Tao Te Ching that combines clarity with lucidity.

Stephen Mitchell is a prolific author, and we have reviewed many of his books. His translation and commentary on the Tao Te Ching is one of great clarity and lucidity. He brings to this classic of Taoism a spiritual sensibility and a fondness for the many mysteries of life. In the foreword, Mitchell gives us a glimpse of his perspective:

"People usually think of Lao-tzu as a hermit, a dropout from society, dwelling serenely in some mountain hut, unvisited except by the occasional traveler arriving from a '60s joke to ask, 'What is the meaning of life?' But it's clear from his teachings that he deeply cared about society, if society means the welfare of one's fellow human beings; his book is, among other things, a treatise on the art of government, whether of a country or of a child. The misperception may arise from his insistence on wei wu wei, literally, 'doing not-doing,' which has been seen as passivity. Nothing could be further from the truth."

Mitchell states that the preparation for this translation was his 14 years of Zen training which introduced him to Lao-tzu and his true disciples and heirs, the early Chinese Zen Masters. He salutes the moral dimension of The Tao Te Ching and points out that the Master is a man or woman (he uses both he and she in the text) "whose life is in perfect harmony with the way things are." Mitchell concludes by offering this confession about his approach: "If I haven't always translated Lao-tzu's words, my intention has always been to translate his mind."

Here is a sample passage:

"Some say that my teaching is nonsense.
Others call it lofty but impractical.
But to those who have looked inside themselves,
this nonsense makes perfect sense.
And to those who put it into practice,
this loftiness has roots that go deep.

I have just three things to teach:
simplicity, patience, compassion.
These three are your greatest treasures.
Simple in actions and in thoughts,
you return to the source of being.
Patient with both friends and enemies,
you accord with the way things are.
Compassionate toward yourself,
you reconcile all beings in the world." 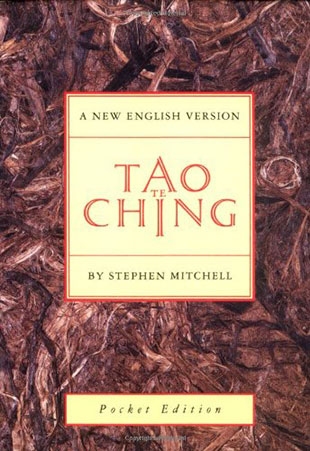