By Thomas Berry
A thought-provoking and morally stirring overview of the ecological crisis facing us and the spiritual vision needed to counter it effectively.

Thomas Berry, one of the chief environmental thinkers in North America, was the director of the Riverdale Center for Religious Research and founder of the History of Religions Program at Fordham University. In this collection of essays edited and organized by Mary Evelyn Tucker, he presents a thought-provoking and morally stirring overview of the ecological crisis facing us and the spiritual vision that is needed to counter it effectively with loving actions.

Berry challenges us to see and to reverence the wonders of the natural world and to set aside the pragmatic and entrenched view of the Earth as being there only for the personal use of humans. The result of this utilitarian "WonderWorld" approach, where the universe is seen as a delivery service of goods, is actually a "WasteWorld."

Many people no longer regard animals as companions, which is unfortunate. Berry shares this vignette:

"While hunting in Arizona, the forester Aldo Leopold shot a female wolf with a pup. He tells us that he reached the wolf in time to watch 'a fierce green fire dying in her eyes.' 'I realized then, and have known ever since that there was something new to me in those eyes — something known only to her and to the mountain.' From then on, his perspective on human relations with the natural world was utterly changed."

For Berry, now is the time for everyone to recognize that Earth is a sacred community. We need to stand up for her rights, just as we campaign for human rights. Religious communities around the globe should be cooperating together in modeling for people what it means to nurture and cherish the earth and all its beings. Spiritual people should be developing new rituals along the lines of Native American initiation ceremonies when infants are presented to the earth in which they will live their lives. We need to feel an intimacy with the trees, the plants, the clouds, and the snow if we are to have a meaningful relationship with the earth and the sky.

In her preface to this collection of essays, Tucker points to Berry's creativity in the face of so many discouraging developments in these times. She refers to the American writer Edith Wharton who suggested that creativity rests on four things: being unafraid of change, having an insatiable intellectual curiosity, being interested in big things, and being happy in small ways. Berry has all four gifts, and on these pages he shares his enthusiasm for the New Story of the Earth and the spiritual steps we can take to partner up with the natural world in meaningful and mutually enriching ways. 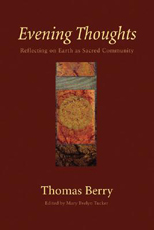