The Life of Hinduism

"Lived Hinduism presents us with a fascinating and considerable range: practices and views that are sometimes obdurately conservative, sometimes subject to rapid change, sometimes overlapping. Hinduism is globalizing fast, but the danger of its succumbing to anyone's vision of global homogeneity is still very remote," write John Stratton Hawley, Ann Whitney Olin Professor of Religion at Barnard College and Vasudha Narayanan, Professor of Religion at the University of Florida in the introduction to this collection of essays on the religion that has been characterized as hospitable to others and truly experiential. This scholarly and eclectic paperback is divided into sections on worship, the life cycle, festival, performance, gurus, caste, diaspora, and identity.

Hindus affirm tolerance and diversity as virtues. On these pages, the reader is treated to a wide-ranging overview of the five strands in the life of Hinduism — doctrine, practice, society, story and performance, and bhakti (intense sharing, devoted adoration). Our favorite essays are Stephen P. Huyler's "The Experience: Approaching God," Doranne Jacobson's "Marriage: Women in India," Kathleen M. Erndl's "Possession by Durga: The Mother Who Possesses," Sitansu S. Chakravarti's "A Diasporic Hindu Creed: Some Basic Features of Hinduism," and Laurie L. Patton and Chakravarthi Ram-Prasad, with Kala Acharya's "Hinduism with Others: Interlogue." 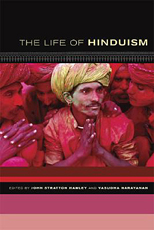