By Sister Wendy Beckett
Insights on prayer from the Catholic nun and acclaimed art critic.

Born in South Africa, Sister Wendy Beckett felt a vocation for religious life as a child and became a nun at the age of 16. An acclaimed art historian, she wowed people around the world with her spiritual and imaginative readings of paintings through her television series and bestselling books. Sister Wendy continues to live in seclusion, spending the majority of each day in prayer and silence at a Carmelite monastery in Norfolk, England.

In the introduction to this book, David Willcock, a television producer and writer, offers a biographical ramble through Sister Wendy's life and work. He collaborated with her on 18 television programs filmed at art galleries around the world. Willcock sees the book as "a series of personal answers to some of the frequently asked questions that have arisen from believers, fellow travelers and those with no faith or religion. They are presented as meditations to be read through or dipped into at will. Each meditation is intended not to put an end to questions, but to provoke further thought and always, always, to leave the last word to God."

The book is organized into three sections:

• The Practice of Prayer, with meditations on Hunger for God, Silence, Prayer and Wholeness, Providence, and Prayer Requests, and others themes;

• Prayer and Belief, with meditations on Scriptures, Choice Not Feelings, Art and Prayer, Doubts, and No Reward for Prayer, and other topics;

• Prayer and Personality, with meditations on The Fullness of Life, Humility, Helplessness, Reconciliation, Forgiveness, Hope, and Peace, and more.

Sister Wendy on Prayer also contains her commentary on thirteen major works of art that have devotional themes. 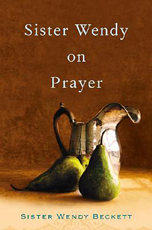