By Charlie Kaufman
The original screenplay for the film Synecdoche, New York with supplemental material.

Synecdoche, New York marked Charlie Kaufman's debut as a film director; he also wrote the script. He's best known for the screenplays for Being John Malkovich and Eternal Sunshine of the Spotless Mind. This entry in Newmarket Press' Shooting Script series centers around Calden Cotard, a 40-year-old theater director whose life is falling apart; his wife and daughter have left him and he is afflicted with a mysterious ailment. After receiving a MacArthur "Genius" fellowship, he decides to use the money to fund a prodigious project which he hopes will give meaning to his life.

This paperback includes an introduction by Charlie Kaufman; the complete shooting script; an exclusive Q & A with Kaufman; a color photo section; and the complete cast and crew credits. In the interview at the end of the book, Kaufman states:

"I think that there's something that happens in real life when people get old. It's a non-dramatic moment for them, after their spouse dies or something, there's this period of waiting and not being the center of the world in any way any more; being kind of pushed aside. People stop being interested in you, and you're just sort of waiting it out. .&nbsp.&nbsp. You're no longer the lead character in any story." 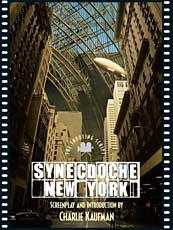