By Gordon Hempton, John Grossman
A creative work on the interplay between silence, nature, and the growing problem of noise pollution.

"Preserving natural silence is as necessary as species preservation, habitat restoration, toxic waste cleanup, and carbon dioxide reduction, to name but a few of the immediate challenges that confront us in this still young century," writes Gordon Hempton, an acoustic ecologist and Emmy award-winning sound recordist. "We've reached a time in human history when our global environmental crisis requires that we make permanent lifestyle changes. More than ever before, we need to fall back in love with the land. Silence is our meeting place."

Gordon Hempton listens carefully to the world; he has recorded on every continent except Antarctica. His recordings of everything from the flutter of butterfly wings to the jet-like swoosh of a bullet train to birdsong have been showcased on nature albums, movie soundtracks, and educational products. Hempton loves to use his ears but equally important to him is the solace of silence:

"Good things come from a quiet place: study, prayer, music, transformation, worship, communion. The words peace and quiet are all but synonymous, and are often spoken of in the same breath. A quiet place is the think tank of the soul, the spawning ground of truth and beauty."

But we are now facing a world where noise pollution is rampant in cities, suburbs, and even nature preserves. Hempton reports that a silence longer than 15 minutes is now extremely rare in the United States and long gone in Europe. In wilderness areas and national parks, the average noise-free interval has shrunk to less than five minutes during daylight hours.

Hempton found a place of silence which he designated One Square Inch in Olympic National Park in Washington State. It has a rugged mountainous interior, lush valleys with the world's tallest trees, and the longest wilderness seashore in the lower 48 states. He has made it his personal mission to defend this oasis of silence from all human-caused noise intrusions. Hempton thinks of silence in two ways: inner silence as that feeling of "reverence for life" and outer silence, which invites us to open up our senses and get connected.

The author decides to go on a quest for the sonic pulse of America on a cross-country trip that takes him from his home in Washington State to Washington, D.C. Here are some his findings:

• Baseball fans angered by the loud music between innings
• Noise pollution in the oceans with the oil industry's seismic exploration and drilling, the rumble of commercial ships, and military sonar
• The irritation of loud construction noises at airports
• More than 20 million Americans being exposed every day to noise that is permanently damaging to their hearing
• Nighttime noise affecting hospital patients
• Hearing loss accelerated by recreational motor sports using Jet Skis, snowmobiles, and dirt bikes
• The weakness of noise ordinances in many communities

Hempton makes a good case for preserving the soundscapes in national parks, and his reverence for silence and quiet places is worth emulating. One Square Inch of Silence also includes a CD of natural sounds recorded by the author and 22 photos of inspiring places mentioned in the book. He concludes:

"Saving silence is not an inconvenient chore, but an awakening joy. When we listen to silence, we hear not absence, but presence.

"I cannot imagine a future without quiet, nor do I care to try." 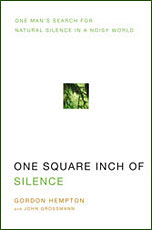