Franklin's Thrift The Lost History of an American Virtue

By Barbara Dafoe Whitehead, David Blankenhorn, Sorcha Brophy-Warren
An engrossing series of essays on thrift as a renewable cultural resource that serves as a spur to saving, conserving, and sharing with others.

David Blankenhorn is the founder and president of the Institute for American Values and the author of Thrift: A Cyclopedia; Barbara Dafoe Whitehead is codirector of Rutger's University's National Marriage Project and an award-winning journalist; and Sorcha Brophy-Warren was an affiliate scholar at the Institute for American Values where she researched thrift and wrote a review of business ethics curricula. In the introduction to this lively collection of essays on the historical understanding of thrift, the editors point to this enduring value's breadth and depth as a broad conception of "social thriving," a source of self-help and mutual aid, a spur of cooperative institutions and associational bonds, a model of generosity and kindness, and a source of pleasure. They also note:

"Thrift has demonstrated great resilience over time. For more than three centuries, it has served as a renewable source of social energy and institutional creativity. [Benjamin] Franklin established a legacy of thrift for future generations, but it has not been a legacy frozen in time. On the contrary, each generation has had to invent a new case for thrift and to come up with institutions that fit contemporary conditions. Today, as the nation faces the failure of major financial institutions, a crisis of overindebtedness, and the depletion of our natural resource wealth, our generation is called to the task of renewing thrift once again."

As Barbara Dafoe Whitehead states in "Franklin's Way to Wealth," the word thrift carries many negative vibes for people today: they think of stinginess, images of grinding deprivation and joyless self-denial; and an anachronistic value from the long-ago past. But for the colorful Benjamin Franklin, thrift was a way of life, a pathway to economic freedom, and the ticket to a new society full of possibilities. The essays here chart the course of this value after Benjamin Franklin in institutions and movements such as mutual savings banks, thrift shops, and credit unions.

The last section of the book presents ideas on "For a New Thrift: Meeting the Twenty-First Century Challenge" with essays on confronting the debt culture, crafting policies to encourage thrift, and private enterprise's role in increased savings. Blankenhorn, Whitehead, and Brophy-Warren conclude that "thrift is a renewable cultural resource. It offers a set of guiding ethical and social principles from which Americans today, no less than in the past, can draw upon in responding to the grave challenges we face today." 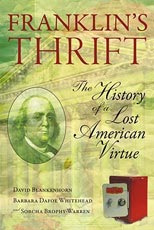