By Van Jones
A passionate, visionary, and hopeful look at what it will take to establish a lively and vital green collar economy in America.

Van Jones is the founder and president of Green for All. An internationally acclaimed and award-winning activist, he is a Senior Fellow at the Center for American Progress. In this passionate, visionary, and hopeful work, Jones envisages a thriving green collar economy which provides millions of new jobs for unemployed people and puts the brakes on the burning of dirty fossil fuels which threaten to cook the Earth. In a chapter titled "Reality Check," he points out that there is already a growing green economy afoot in the United States which needs more funding even as the government continues to give billions of dollars in subsides to oil and coal companies. In 2006, renewable energy and energy-efficiency technologies generated 8.5 million new jobs, nearly $970 billion in revenue and more than $100 billion in industry profits. It is Jones's contention that the American generation currently in power needs to retrofit, reboot, and reenergize the nation — to rescue and reinvent the economy and create a fully clean and renewable system.

All of these projects will help to stem the tide of environmental destruction. Jones outlines three waves of environmentalism as conservation, regulation, and investment and warns against the dangers of "eco-apartheid" where ecological "haves" toy with eating organic food and installing solar panels while ecological "have-nots" try to survive in large cities drenched in pollution, toxic chemicals, and rampant disease. Eco-equity demands that all share in the benefits of our transition to a green economy. We all need to learn to reverence the creation. Jones moves on to a description of a "Green Growth Alliance" (labor, social justice activists, environmentalists, students, and faith organizations) that must band together to change the face of politics in America. He then identifies pioneers in energy, food, waste, water, and transportation who are already demonstrating green pathways to prosperity. Jones concludes with specific government policies that are needed to support the growing green economy. He quotes Paul Hawken:

"Healing the wounds of the earth and its people does not require saintliness or a political party, only gumption and persistence. It is not a liberal or conservative activity; it is a sacred act." 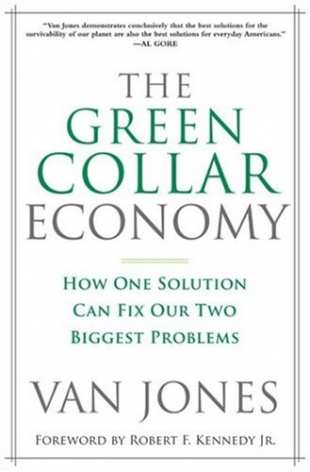