A Thread of Kindness A Tzedaka Story

By Leah Perl Shollar
A sturdy Jewish folktale about the benefits that accrue from the spiritual practice of generosity and putting others before ourselves.

In Old Constantinople, Avraham is a poor farmer who is living with his thrifty wife Esther and their five sons. They live in two rooms and are grateful for having bread and milk to eat for every meal. They also view their children as being worth more than all the riches in the world.

Avraham encounters an old man who asks him if the One Above would give you six years of wealth, would you take it now or when you are old? After consulting with Esther, they decide to take the wealth now. At home, his sons dig up a chest full of gold coins and rejoice in their immense good fortune. But instead of spending the coins on themselves, they decide to share it with others: "If we help others, the thread of kindness will stretch on forever," says Esther. So they give money away for a boy's Bar Mitzva celebration, a couple's wedding, some shoes for a poor boy, and many other deeds of kindness. Six years pass and the old man returns to see whether or not he should reclaim the treasure.

A Thread of Kindness is adapted from a Jewish Midrash, Yalkut Shimoni (Ruth 4, 607) by Leah Shollar. The illustrations are by Shoshana Mekibel. Generosity is a virtue in all of the world's religions, and this sturdy folktale shows how blessings abound when we share what we have with others who are needier than we are. This children's book is designed for kids from grades two through four. 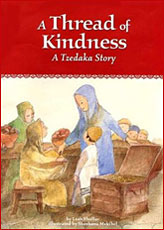