The Great Work Our Way into the Future

By Thomas Berry
An essential volume for anyone who cherishes the earth.

"History is governed by those overarching movements that give shape and meaning to life by relating the human venture to the larger destinies of the universe. Creating such a movement might be called the Great Work of a people," writes the eminent cultural historian Thomas Berry, coauthor with Brian Swimme of The Universe Story: A Celebration of the Unfolding of the Cosmos. The challenge of the present time is "to carry out the transition from a period of human devastation of the Earth to a period when humans would be present to the planet in a mutually beneficial manner."

We have been blessed with nature writers who have awakened us to the wonders of the good Earth. Among those Berry appreciates are Loren Eiseley, Edward Abbey, Gary Snyder, Terry Tempest Williams, Barry Lopez, and Annie Dillard. Indigenous writers such as Oren Lyons, Linda Hogan, and Vine Deloria have opened our eyes to "the great liturgy of the universe." We celebrate its story with rituals and ceremonies.

Ecological geography and ethics are essential tools for what Berry calls "rethinking our situation at the species level." Instead of emphasizing our right to reduce the Earth to an object for human possession and use, we need to teach people to reverence the divine milieu in which we live. All of these streams feed the Great Work that lies before us. This is an essential volume for anyone who cherishes the Earth. 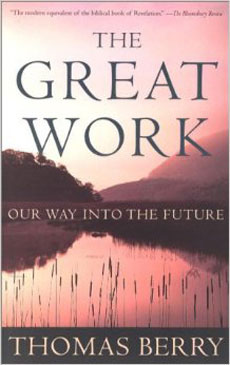