By Brother David Steindl-Rast
An illuminating, bold, and unconventional interpretation of the Apostles' Creed by a leader in the field of interreligious dialogue.

"Faith as experience lies deeper than words and concepts. It is an inner gesture by which we entrust ourselves totally and unconditionally to life — life perceived as our own, yet as a power greater than ourselves," writes Brother David Steindl-Rast, a Catholic monk of the Benedictine Order who is known for his pioneering work in interfaith dialogue and his espousal and elucidation of the spiritual practice of gratefulness. He is the author of many books including Common Sense Spirituality. He is one of our Living Spiritual Teachers and www.gratefulness.org, the website he cofounded, is a sister site of Spirituality & Practice.

In the Christian tradition, there have been many heated arguments over creed, dividing rather than uniting people of different spiritual perspectives. Brother David boldly writes: "The task of interreligious dialogue is to make divergent beliefs transparent to the one faith we share." In pursuit of that noble goal, he subjects the statements of the Apostles' Creed to three probing questions:

Brother David has been praying this Creed for almost 80 years. That alone makes us eager to hear what he has to say.

In his probe of "I Believe in God," he suggests that those who have an aversion to the G-word try "Ultimate Reality," "Ground of Being," or "Source of Life." He admits that "expressing faith in God gives a firm foundation to joyful, grateful, and creative living." He compels us to stretch when he asks us to understand the whole universe as God's body. Such an approach enables the faithful to see the Gulf Oil Spill as a grievous wound on God's body.

Whereas many have used the creedal statement of belief in Jesus Christ as a dogmatic tool to separate true Christians from infidels, Brother David goes in the opposite direction: "We can encounter God in a human being — in any human being, even in ourselves." In his commentary on Jesus Christ as "God's Only Son," we read that "every human being is a son or daughter of God." Which means that like Jesus, we are each called to stand up to injustice wherever we find it.

In succeeding chapters, Brother David characterizes the Holy Spirit as "an inspiration and invitation to improvise," the Virgin Birth as a mythic image for a fresh start, and Jesus' crucifixion not as a substitutionary suffering but as an act of making peace, an overcoming of death, and a blazing of a trail for us into true joy.

Deeper Than Words is spiced up with colorful and creative passages from the poetry of G.M. Hopkins, the films Groundhog Day and Jesus of Montreal, and quotations from teachers of different spiritual traditions.

From his commentary on the first word of the Creed ("I give my heart to the One I trust") to the last word ("Amen"), Brother shares the radical vision of the faith of a wise man who sees that life in fullness is the essence of the Apostles' Creed. He ends with a soul-stirring examination of meaning in all the world religions coming through the following Trinity:

"I would speak of the human quest for meaning as a great circle-dance in which those who live by the Word hold hands with those who dive into the Silence and with those whose path is Understanding." 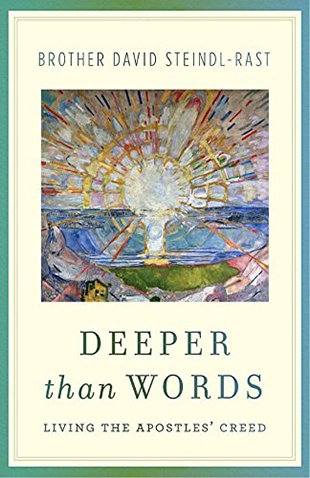