A New Design for Living

Ernest Holmes (1887–1961) established Religious Science, known also as Science of Mind. In order to explain this confluence of religion, philosophy, and science, he wrote a textbook and established a monthly magazine. The fellowship of believers in this practice of transformative thinking emphasizes the unity of all life and the necessity of positive thoughts. For many years, Holmes's books have not been available to readers. Tarcher has published a set of his works as part of their Ernest Holmes Library.

A New Design for Living is one of the preeminent works by this founder of Church of Religious Science, second only to The Science of Mind. In her foreword, Kathy Hearn salutes Ernest Holmes for his principles of "the abiding reality of God and the divine dimension of our life and individual being. At the same time, they are completely practical and applicable to everyday situations." In 23 chapters, Holmes lays out a plan for redesigning our lives that includes probes on everyday wonders, our partnership with the Infinite, making the most of our creativity, the law of correspondence, the process of attracting what we think, the need of faith, the idea that life is not against you, the abundant universe, the power of love, harmonious relationships, and spiritual mind treatment.

Holmes states: "We began by saying that the greatest discovery man could ever make was the discovery of the creative power of his own thought. Perhaps the greatest achievement man can attain to is the creative use of his thought for the experiencing of greater good in every aspect of living." He then goes on to explain that we have a too low opinion of ourselves and should open to the creative potential within us. We should never fear change and always keep in touch with "the Spirit that resides within us." We were especially impressed with Holmes's refusal to take seriously the dualistic view of the world as a battleground between good and evil. Letting go of a dualistic point of view is a much needed effort for people living amidst hatred and prejudice. 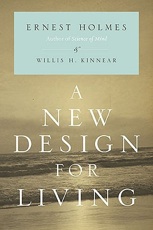