By Daniel Akst
Freedom and affluence provide the seedbed for the self-indulgence, addiction, and self-destruction afoot in America.

Daniel Akst has written for The New York Times, the Wall Street Journal, the Los Angeles Times, Slate, and many other publications. He is the author of one book of nonfiction and two novels. In this hard-hitting work of cultural criticism, Akst looks at the rampant self-indulgence and addiction afoot in America, a country where freedom and affluence provide the seedbed for such excesses. He believes that the biggest and most enduring challenge of individuals in a free society is to practice more self-control and restraint. Akst is troubled by the large number of people who persist in dangerous habits such as smoking, eating and drinking too much, and having risky sex. These behaviors account for half the deaths in the United States. In addition, there are the problems stemming from gambling, anorexia, anger, being physically inactive, and other forms of self-destructive behavior.

The recent financial meltdown represents a vivid parable about a nation out of control and seeking immediate self-gratification, no matter what the consequences. Akst quotes Pogo: "We have met the enemy and he is us." The Greek philosophers long ago talked about the individuals fighting the desires that lead us into temptation. Aristotle believed that self-mastery is the key to the good life: "I count him braver who overcomes his desires than him who conquers his enemies, for the hardest victory is the victory over self."

Akst covers a smorgasbord of other related material in the book including Freud's fascination with self-control, Benjamin Franklin's self-improvement projects, tapping your best self through second-order desires, the role of the brain and genes on controlling our impulses, and the necessity for those with bad habits to practice "precommitment" which means transcending short-term gratification and selfishness. Akst ends with a series of suggestions for those who want achieve more self-control. 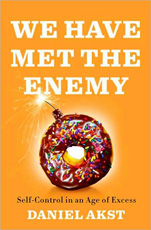