A Mind of Winter Poems for a Snowy Season

Robert Atwan is the founding editor of the American Essays series and has many books to his credit. Donald Hall, the author of 15 volumes of poetry, has written a lyrical introduction to this sparkling collection 32 poems on winter. He describes the universal delight in witnessing snow falling:

"Sky greys over, formidable in its warnings, and clouds blacken, until the first flutter falls. Flakes gather density until the frigid air is a white fabric of descent. Descent is the music of snow, preceding to its coda, flat over garden and road and hay field."

If you have a mind of winter (the line comes from "The Snow’s Man" by Wallace Stevens), you will enjoy these evocative poems musing on the cold, winter winds, the creaking of snow underfoot, the inconvenience of blizzards, the shimmering of icicles, and the snowman.

We liked Anne Sexton’s "Landscape Winter" where she writes:

"Yet, right now,
The outside world seems oblivious
And the snow is happy and all is quiet
As the night waits for its breakfast."

Reading these poems one senses that winter is a wonderland to those who are alert to the seasons, the natural world, and the beauty of snow. 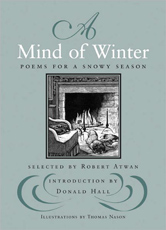