By Graham Harvey
A scholarly collection of essays on spirit possession, witchcraft, rituals and cosmology.

"Indigenous religions," according to Graham Harvey, senior lecturer in Religious Studies at King Alfred's College, Winchester, United Kingdom, "are the majority of the world's religions. They are as diverse as the languages spoken, the music made, and the means of subsistence employed by the many and various people who live them in a wide variety of environments, in all continents of the Earth." In this scholarly collection of essays, the editor has gathered together pieces covering spirit possession, witchcraft, rituals, cosmology, and much more.

For example, in the first section on "Persons," Kenneth M. Morrison examines Ojibwa interactions with animals, plants, and natural objects. Piers Vitebsky surveys shamanism as the world's oldest form of religion. In "Powers," Peter J. Mataira assesses the importance of sacred knowledge and sacred boundaries among the Maori. Lynn Hume looks at the dreaming in contemporary Aboriginal Australians. In the final section on "Gifts," Charlotte E. Hardman focuses on rites of passage among the Lohorung Rai of East Nepal while Teri Brewer sheds light on the Native American powwow. 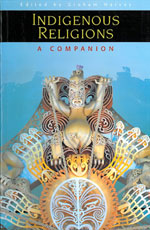