By Maureen Wright
Story about how a disagreement among animals in the jungle opens the door to a both/and view of the world and reality.

In the jungle, there is a disagreement among the majority of animals and one stubborn monkey. The lion and his followers proclaim that it is Earth Day, and they are already involved in various projects to improve the environment, such as planting gardens, picking up litter, using cloth bags, recycling, and starting a compost bin. Despite their good intentions for the planet, they are a little too rigid in their vehement opposition to the little monkey's insistence that it is his birthday on April 22.

It takes the arrival of a birthday cake to convince all the animals who have stood by their commitments to Earth Day to realize that the monkey could be telling them the truth as well. It turns out that everyone is right: April 22 is Earth Day and it is the monkey's birthday.

Writer Maureen Wright and illustrator Violet Kim succeed in introducing children to a world where either/or has given way to both/and. It's not a moment too late given all the media that brainwashes kids into accepting a dualistic sense of the world with "us versus them." Everybody can celebrate when they accept the reality of a both/and universe. 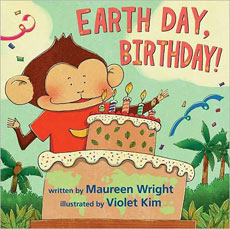