My Bright Abyss Meditation of a Modern Believer

By Christian Wiman
A memoir of a poet's battle with cancer during which he comes to a new understanding of his faith.

Christian Wiman is a poet, former editor of Poetry Magazine and author of six books. In this memoir, which he calls a "Meditation of a Modern Believer," he ponders the pain and the terror of learning that he had incurable cancer. Wiman lets in light from other sources, such as Paul Tillich, Dietrich Bonhoeffer, and Simone Weil. He ponders his mystical experience of the Holy Spirit at the age of 12 and later writes a farewell to his twin daughters. The past and the future lay claim to his attention as he feels the pinch of living under the imminent sentence of death.

Wiman, at one point, describes religious poets (Gerard Manley Hopkins and George Herbert) as throwing him lifelines from their graves. He is also perked up by the works of devotional poets of death — Emily Dickinson, Wallace Stevens, Samuel Beckett, and Albert Camus. Reading these writers, the author has a startling revelation: "Sometimes God calls a person to unbelief in order that faith may take new forms."

Wiman comes to see that faith has little to do with belief and a lot to do with the acceptance of all the gifts God has showered upon us. It also means buying into the fact that we are accepted by God through grace. 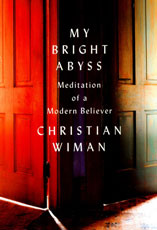