AUM The Melody of Love

By Joseph Bharat Cornell
Understandings and practices to access the spiritual vibrations and sacred powers of the word AUM.

"Seek the sound that never ceases," said Rumi. He was speaking of the sound that has been experienced and practiced by saints, sages, and mystics throughout history. It is recorded in the Old and New Testaments of the Bible, the Vedas of India, Buddhist texts, and Sufi literature. AUM is the cosmic sound referred to also as the "Word," the "Comforter," and the "Amen."

According to Joseph Bharat Cornell:

"AUM is the outpouring of God's love
flowing to you — and to all creation.
When you commune with AUM,
you enter into, and flow with,
the stream of God's love."

This gift of grace not only manifests itself as sound but appears as light, ecstatic bliss, heavenly peace, and perfect wisdom. Cornell shares stories about the wonders that come with chanting AUM with others or visualizing it on your own. For example, Paramhansa Yogananda used it in a spiritual practice for getting to sleep: "Write AUM or Amen on your pillow with your fingers. Mentally visualize light around your body."

Cornell includes many other ways to practice with AUM in this small paperback, including experimental meditations, visualizations, and creative exercises. He sees it as a way to connect with the emanations of Divine Wisdom and the eight attributes of God — love, peace, joy, power, wisdom, calmness, light, and sound:

"Living in the consciousness of AUM is the highest way to serve others. Then AUM's thrilling bliss flows through your inner being and touches the hearts of all creation. 'Meditate on AUM,' Swami Rama Tirtha said, 'and be a giver of peace to mankind.' " 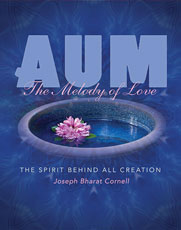