Learning to Walk in the Dark

By Barbara Brown Taylor
A study that models the questing spirit of creativity, openness, and playfulness in an examination of the manifold meanings of re-learning to walk in the dark.

Barbara Brown Taylor spent 15 years in parish ministry and was named one of the 12 most effective preachers in the English-speaking world by Baylor University in 1996. She became a professor of religion at Piedmont College in 1998. Her memoir Leaving Church came out in 2006. In An Altar in the World, she wrote a field guide to spiritual practices which can lend meaning and richness to our lives.

Taylor hopes that Christians and other seekers will see walking in the dark as "a spiritual skill." Darkness has gotten a bad rep with children frightened of monsters under their beds and millions of believers unsettled by images of God in the Bible plunging the world into darkness and chaos. Many pay a high price for their fear of the dark, including sleep deprivation or anxieties about being a victim of a dreadful crime. Those who have divided the world in darkness and light also see dualisms between villains versus heroes and those who have the truth versus those living in illusion.

In a series of wise and enlightening chapters, Taylor shares her informal study of those who have seriously worked with darkness including Miriam Greenspan, Jacques Lusseyran, John of the Cross, Gerald May, and Mother Teresa. She has some interesting things to say about the Black Madonna, healing through the dark emotions, restaurants where you can dine in the dark, the night sky and the moon, and more.

The best thing about Taylor's book is that she models the faith and the courage and — yes — even the creativity and playfulness it takes to re-learn to walk in the dark without fear or dismay. She is grateful for the chance to have explored this topic, and in the process, to have discovered a potpourri of Bible stories that happen after dark, a new set of teachers to usher her around in unfamiliar places, and a deeper appreciation of the mysteries that accompany both God's presence and absence. 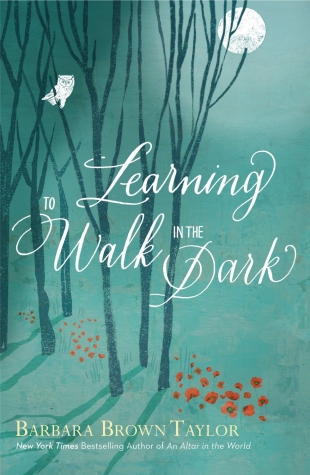