By Leslie Jamison
A talented essayist with a spiritual perspective on empathy and other adventures of her mind, body, and soul.

"Empathy isn't just something that happens to us — a meteor shower of synapses firing across the brain — it's also a choice we make: to pay attention, to extend ourselves. It's made of exertion, that dowdier cousin of impulse. Sometimes we care for another because we know we should, or because it's asked for, but this doesn't make our caring hollow. The act of choosing simply means we've committed ourselves to a set of behaviors greater than the sum of our individual inclinations." So writes Leslie Jamison in the first of eleven essays which put on full display her exquisite writing style wed to an impressive spiritual sensitivity.

The author is keenly interested in empathy, the art of entering into another person's pain, and assessing the ways it can expand and soften the heart. A love of questing seems to come naturally to Jamison who reflects on murder trials, extreme endurance races, men in prison, a group of people who suffer from a phantom disease, and the HBO series Girls.

We were very much taken by "In Defense of Saccharin(e)" where Jamison examines the arguments for and against sentimentality in the arts. There are plenty of heavy hitters on the negative side but the author succeeds in finding her response to excessive emotions smack dab in the middle. 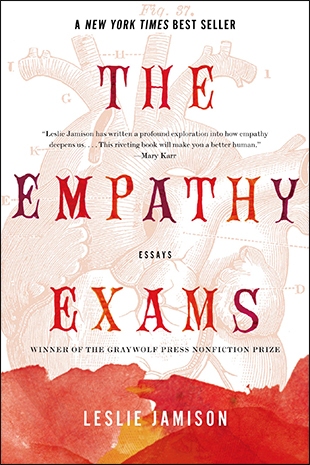