Letters of Direction Thoughts on the Spiritual Life

By Abbe Henri de Tourville
Letters on the basics of spiritual direction.

Abbé Henri de Tourville was born in 1842, ordained as a French priest in 1873, and died in 1903. His two most noteworthy pupils were Friedrich Von Hügel and Charles de Foucauld. De Tourville conveyed his spiritual wisdom to others mostly through letters. Now these marvelously written and insightful missives have been translated into English by Lucy Menzies.

De Tourville says that the art of spiritual direction is "not to refashion your soul on the model of some imported or prescribed interior life, but to direct effectually the powers and impulses which God has chosen to give you and which He alone can give. . . . The best directors are not those who are tied to any system, but those whose aim is to direct, help, and further each soul according to its own nature. For God never makes any two souls exactly alike."

It is this flexible and capacious style that makes de Tourville's counsel so wise and timely. Whereas other less imaginative directors advise following the narrow path, he tells us to "choose the broadest, most generous way." De Tourville salutes what he calls "spiritual independence" and is suspicious of perfectionism and submission to tradition. At one point he writes: "We are the brothers and sisters of the Saints. They became holy in their way; we must become holy in ours, not in theirs."

Spiritual directors will find fresh treatments of suffering, grace, love, and patience on these pages. De Tourville is especially cogent in his comments on faith. 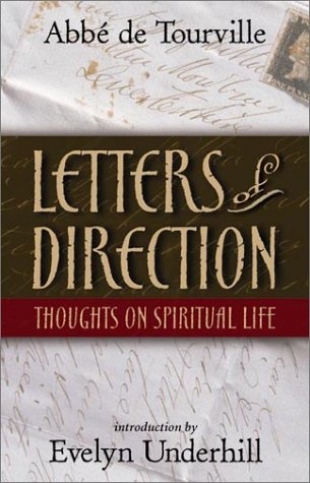