By Alfie Kohn
An assessment of the criticism of today's parents as being too permissive with their spoiled and entitled kids.

Alfie Kohn is the author of 12 previous books, including Unconditional Parenting. His work has helped to shape the thinking of parents, educators, and social scientists throughout the world. Visit his website www.alfiekohn.org.

In this angry work, independent scholar Alfie Kohn lashes out at the myth of the spoiled child which is rampant in American society. For a country that is always talking about how our children are the future, we sure are hard on them and their families. Parents are criticized for being too permissive and spoiling their children. Then the kids are criticized too. Critics are also upset over the inflation of self-esteem and the diminution of competition. Since parents seem incapable of keeping their children in line, it is up to girls and boys to practice self-discipline. According to this conservative ethic, children should be self-sufficient, well-behaved, and hard -working.

Kohn succeeds in convincing us to rethink the conventional wisdom about the spoiled child. He argues that underneath all the complaints is nothing more than the long-lasting cultural wars between conservatives and liberals. For the children's sake, it's unfortunate that the liberals aren't holding up their side of the debate very well. 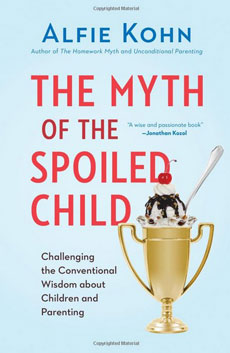