This Day in June

By Gayle E. Pitman
A children's book that salutes the enthusiasm and pride of members of the GLBT community as they march together in a parade.

Magination Press is an imprint of the American Psychological Association, the largest scientific and professional organization representing psychologists in the United States and the largest association of psychologists worldwide.

This lively and affirming children's picture book celebrates the enthusiasm of gay, lesbian, bisexual, and transgender people and their supporters as they participate in a Pride March. Among the pictures of all happy people in a wide variety of outfits, there is a two-page spread of a group carrying a banner: "This Day in June We're All United." The rhyming text by Gayle E. Pitman and the colorful illustrations by Kristyna Litten convey the energy of the GLBT community.

This Day in June has been designed for children ages 4 through 8. The book includes a "Reading Guide" keyed to the march pictures filled with facts about GLBT history and culture. There is also a "Note to Parents and Caregivers" with suggestions on how to talk to children about sexual orientation and gender identity. We highly recommend this accessible resource. 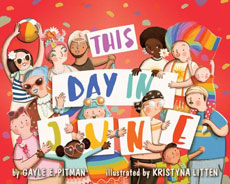