By Bethanie Deeney Murguia
Touching story about a little boy's disappointment that fifth birthday doesn't seem to bring any genuine change into his life.

Fritz Newton is eagerly looking forward to his fifth birthday. On his fourth birthday, his parents served him special pancakes, gave him a cape, and picked apples for his birthday pie. But when the magic day arrives, Fritz feels disappointed. "It's your big day," says his father but nothing seems to have changed even though he gets a new pair of sneakers and has the birthday crown put on his head in school. Fritz still feels four with the same limitations and inadequacies. It takes a special and unexpected meeting to shake him out of his doldrums and usher him into the joy of being five.

Writer and illustrator Bethanie Deeney Murguia has fashioned a touching story about a boy who wants to see change in his life. Many will identify with Fritz and the disappointment he feels on his special day. Young and old alike yearn for transformation. But most of the time, we cannot make it happen and must keep alert to when it takes us by surprise. 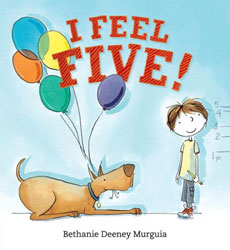