By Patrick Gilger
Essays by Jesuits in training on the presence of God in all things.

In the Foreword, James Martin (Between Heaven and Mirth) talks about the formation of The Jesuit Post, a website looking at "the intersection of faith and culture," written by Jesuits in training (aka "formation"). The essays have been designed to speak to the young (teens through thirties) "who might otherwise be bored with organized religion, confused about faith, but still curious about God." The bottom line, according to Martin, is that The Jesuit Post fulfills the Jesuit mission of "finding God in all things":

"These writers are absolutely alive to the Spirit at work in the world . . . Their firm grounding in faith means that they can proclaim the Good News in new ways with an old virtue: zeal. These guys are zealous for the reign of God, zealous about using any means necessary to spread the gospel, and zealous to help you find God everywhere."

This book contains some of the best pieces written for the website over the last few years along with 20 newly written ones. The editor, Patrick Gilger, is to be commended for finding such a wide range of capable and creative Jesuits exploring faith, God, frontiers, culture, mystery, and love. Some of our favorites are Eric Sundrup on crazies on the Internet; Brendan Busse on the tyranny of possibility and the slavery of commitment; Jason Welle on the care for mentally ill people; Sam Sawyer on the new atheism; and George Williams on ministry on Death Row. 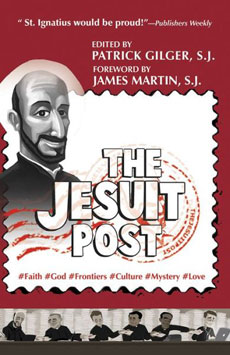