By Sarah Bee
A delightful tale about the power of optimism and a positive attitude.

Psychologist David Richo has written: "The word yes sums up spirituality and sanity. An unconditional yes to what is frees us when we face the givens of life. Yes is born of trust and heals fear."

In this parabolic story by Sarah Bee, Yes is a big orange creature who is snug as a bug in his warm nest. But suddenly he is overtaken by an urge to go on a quest. Outside is the raucous world of Nos who move in swarms of negativity: "They picked and nipped and snipped and snicked." When Yes reaches a tree, they surround him in a thick cloud and tell him "No," he can't climb it. But he does anyway and shouts "Yes!"

The Nos are critical and doubtful and cynical. They try to stop the journey of Yes as he crosses a bridge and a river, and plows through a wooded area, and then arrives at a big rolling hill. The Nos give one last shot of their toxicity but the big orange creature prances to the top of the hill and shouts out a big and bold and affirmative "YES!"

Our recommendation of this astonishing children's picture book deserves a closing and affirmative nod to Dag Hammarskjold who wrote: 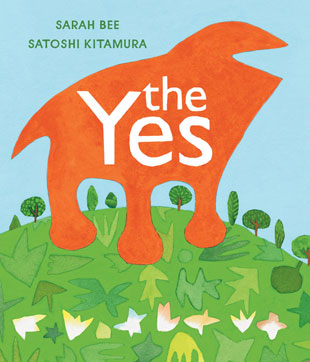