By Diana L. Eck
A watershed work mapping the changes in the soulscape of this nation, the challenges stemming from diversity, and the usefulness of the activities of the interfaith movement.

Facilitated by the 1965 Immigration and Naturalization Act, which eliminated quotas by national origins, the religious landscape of America has drastically changed over the past 30 years. Most striking has been the great influx of Muslims, Hindus, Buddhists, Jains, Sikhs, and Zoroastrians. There are more American Muslims than there are American Episcopalians, Presbyterians, or Jews. There are more than 300 temples in Los Angeles, home to the greatest variety of Buddhists in the world.

In this watershed work, Diana L. Eck, Professor of Comparative Religions and Indian Studies at Harvard University, shares many of her findings as director of the Pluralism Project, which has mapped this dramatic and exciting cultural development. She and her colleagues have visited Muslim mosques, Sikh gurdwaras, and Hindu, Buddhist, and Jain temples across the country.

Eck writes as a Christian pluralist who has had her own faith broadened and deepened by her encounters with people of different religious traditions. The spiritual practice of hospitality has often been a minority position in American society, where a tradition of exclusivity is deep and still enduring. Eck presents a bold and daring alternative: "Today we have the unparalleled opportunity to build intentionally and actively, a culture of pluralism among people of many cultures and faiths in America. . . . This is the greatest form of lasting leadership that we can offer the world."

The author presents succinct and enlightening portraits of American Hindus, Buddhists, and Muslims. She outlines some of the challenges that the armed services, public schools, workplaces, and the zoning boards of communities are facing as a result of the variety of beliefs and practices of diverse religious groups. With great élan, Eck salutes the activities of the interfaith movement that has begun to sponsor increased dialogue and more cooperative ventures between members of different traditions. And, last but not least, she asks us to consider the various ways that this burgeoning religious diversity will transform everything from American electoral politics to education to healthcare.

Eck clearly sees positive signs of a public ceremonial discourse about the new multi-religious America taking place. Her substantive and soul-stirring book is a bridge-building masterpiece. 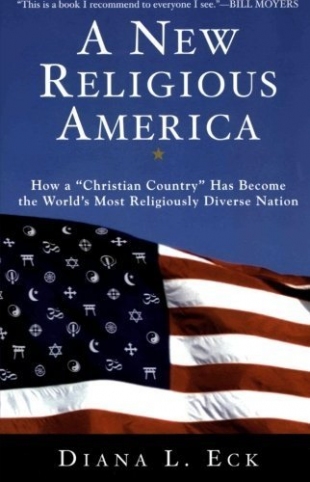