Tears to Triumph The Spiritual Journey from Suffering to Enlightenment

By Marianne Williamson
Addresses the depression and keen sense of loss afoot in today's culture.

Marianne Williamson is an internationally acclaimed author and lecturer. Six of her eleven published books have been New York Times bestsellers. She has been a popular guest on numerous television programs, including Oprah, Larry King Live, Good Morning America, and Charlie Rose. She has lectured professionally since 1983. In 1989, she founded Project Angel Food, a meals-on-wheels program for homebound people with AIDS in the Los Angeles area. It has served more than ten million meals. She is also featured as one of Spirituality & Practice's Living Spiritual Teachers.

Williamson is convinced that there is an epidemic of depression afoot in America and elsewhere. She confesses that she has twice been diagnosed as clinically depressed and is familiar with dark nights of the soul and the suffering that goes along with this malaise. But Williamson also reveals that she has found healing, transformation, and personal renewal through these spiritual emergencies. Breakdowns can, through God's love and grace, be breakthroughs.

Feeling our pain and suffering can lead to spiritual healing since "most of our suffering is due less to our circumstances than to our thoughts about them." Sharing insights from A Course in Miracles, Williamson notes that a miracle is a shift in perception from fear to love. She refuses to reduce depression to mere brain chemistry and laments the reliance of so many depressed people on the pharmaceutical industry. "Love, forgiveness, compassion, and prayer cause physiological changes as well," she notes. She much prefers that we "excavate our internal darkness -- our barriers to love -- for only then can we release them." Those who are depressed can reclaim their souls not by popping a pill but by acknowledging the spiritual meaning of their sadness.

In addition to her stories about people with depression, the author also includes an edifying group of prayers which sees as "the conduits of miracles." (See the excerpt from the book for an example). Williamson salutes faith for giving us the patience to endure and she ponders the source of so much suffering as "our false attachment to the kingdom of the personal self."

With commendable energy, Williamson surges ahead in the last chapters of the book with material on forgiveness, relationship difficulties, changing ourselves and our world, and the enlightened consciousness of Buddha, Moses, and Jesus. As she has done in the past, Williamson is right on target in her assessment of the present moment when so many people have been numbed and stopped in their tracks by depression and a keen sense of loss. The medicine she provides is familiar but well worth trying as we shed our tears and seek the light that shines in the darkness. 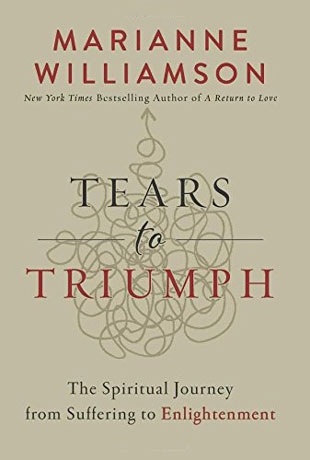