Passing Time An Essay on Waiting

By Andrea Kohler
A philosophical masterwork on time, transitions, patience, and the end-game of death.

"Dead eternities at railroad stations, airports, and the call centers of life: 'please wait' is the mantra of the new rhetoric of appeasement, the synthetic global muzak that has made patience the cardinal virtue of service-based societies," writes Andrea Kohler, a cultural correspondent for the Swiss daily newspaper Neue Zuricher Zeitung and the recipient of the 2003 Berlin Book Critics Prize.

With lyrical prose and a sophisticated perspective, the author takes us on a mind-expanding journey through our accelerated times where we spend our breaks from work in gyms and spas in order to get in shape, where escape from work has become just another pathway to greater productivity and efficiency.

For Kohler and many other creative souls, homo sapiens is the waiting animal capable of anticipating death. The idea of waiting for someone appeared in the sixteenth century but since the eighteenth century and the age of romanticism, this state of being switched tracks to a more painful side — one waits with impatience and irritation. Those kept waiting fret as precious time goes by and replay in what Kohler calls "a continuous reenactment of the primal scene of abandonment." Think of the feelings you have when you are put on hold and hear the familiar words "Please wait for the next available representative."

With great elan Kohler lets light in from all sides of her topic with her commentary on childhood as a stage of life steeped in rituals designed to familiarize them with this listless state of being; the practice of keeping others waiting as the prerogative of the powerful; the government as the quintessential modern waiting room; Proust and Kafka as the crown witnesses to our era's accelerated time; the modern doctor's waiting room as a limbo of dread and uncertainty; and the fairy tale characters of Snow White and Sleeping Beauty as creatures of waiting.

Passing Time: An Essay on Waiting by Adrea Kohler is a philosophical masterwork on time, transitions, patience, and the end-game of death. 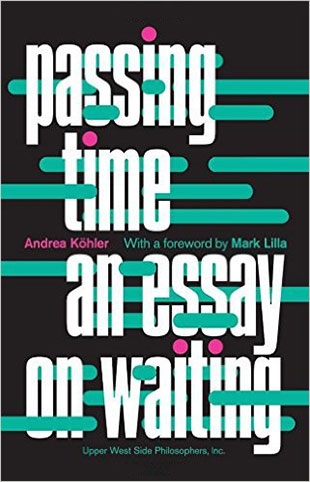