The Complacent Class The Self-Defeating Quest for the American Dream

By Tyler Cowen
An assessment of American society as stagnated and in need of major change.

Americans have always taken pride in the idea that we are a nation of go-getters and risk-takers who venture out into new territory to create change and innovation. But today's realities point to a different description of the country. According to economist, blogger, and bestselling author Tyler Cowen, America is characterized by stagnation, inequality, segregation by income, complacency, and a distinct lack of energy in entrepreneurialism.

While the country's rich and powerful elite sequester themselves in gated communities and brag about the ideals of diversity, the poor get poorer and groups of like-minded people cluster with those of their class, educational background, and love of security and stability. Two final signs of trouble on the economic horizon are growing industrial concentration (in 40 percent of U.S. manufacturing industries, the top four control half or more of the market) and the lack of start-up companies.

Can America reinvigorate itself as it did during the post-World War II or the Reagan eras? Cowen is willing to go with an optimistic scenario of the future carried by artificial intelligence, clean cheap energy, driverless cars, and a more fervid and multidimensional espousal of peace. But to get there will require a Great Reset (see excerpt). 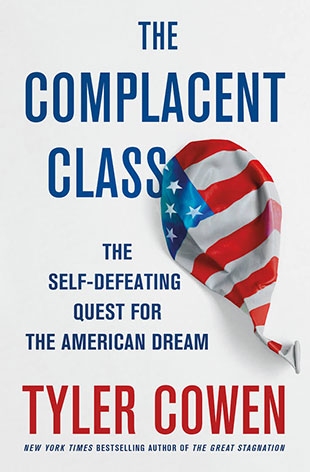